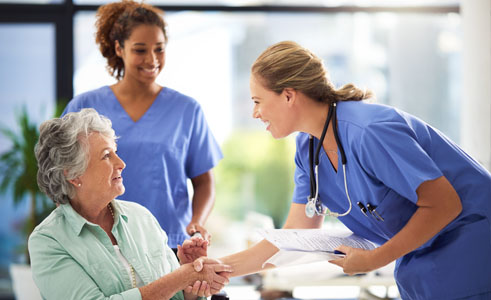 The United States is undergoing a massive nursing shortage. Largely due to the Affordable Care Act’s passing, nearly 20 million people have gained access to medical care since 2010. With an aging population and experienced nurses retiring at a rapid pace, the urgency for new nurses to join the workforce has perhaps never been greater. In fact, hospitals across the country are offering truly stunning incentives in an effort to entice young minds to join the field.

It Pays To Be a Nurse

UCHealth, for example, operates nine acute-care hospitals and more than 100 clinics across the states of Colorado, Wyoming, and Nebraska. Faced with shortages in nearly each facility, UCHealth has offered relocation allowances and signing bonuses of up to $10,000. The firm also started a Traveler RN program, which allows nurses to do 13-week rotations at different UCHealth facilities. And, as if that weren’t enough, the company also provides nurses with $4,000 a year to invest in continuing education.

Inova Health System has offered candidates with at least two years of critical care experience incentives as well. For those who live more than 50 miles from one of its six Washington, D.C.-area hospitals, Inova Health System has offered a $20,000 sign-on bonus and up to $20,000 in reimbursable relocation costs. Candidates who live within 50 miles of one of Inova’s facilities are offered a $10,000 signing bonus.

Even West Virginia’s WVU Medicine, which operates eight hospitals in the state, has offered incentives to fill vacancies. The institution recently announced that it will start offering tuition reimbursement for employees and their children. As part of its commuter program, WVU also offers free housing to some of its nurses.

Though it is unclear how much these measures will help in retaining nurses, studies have shown that these institutions are not off-base in their efforts to win-over nurses entering the workforce. The U.S. Bureau of Labor Statistics projects that 1.1 million new nurses will be needed by 2022 in an effort to replace retiring members of the current workforce and meet the needs of a growing population. The U.S. Bureau of Labor Statistics also projected a 15 percent increase in job openings within the next eight years – a much higher rate than the national average. Current statistics and disclosures have revealed that the median salary for nurses with a bachelor’s degree in 2016 was $68,450 per year – a figure that only increases for those with higher education. And, with an increased demand in the industry, this figure may rise in a similar fashion as the profession’s job outlook. Though the profession itself is as consequential as they come, it seems nurses entering the workforce will be handsomely rewarded.