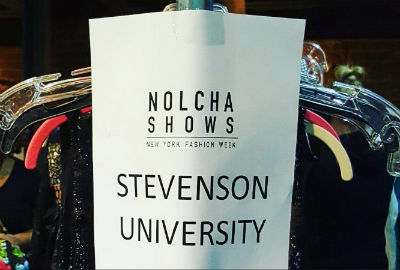 I sat down with Stevenson fashion design student Antrice Sykes to talk about her experience in New York during the most eventful and busiest times of the year, New York Fashion Week. Antrice and other Stevenson students attended Fashion Week in February where they each made a black dress representing the theme, Little Black Dress Reinvented. Antrice informed me that she goes to New York yearly to shop for her own items as well as pieces for her designs, but she has never attended a fashion show in New York.

Through this experience, she was able to not just attend a show but watch her own creations on the runway. Upon arrival at the show, Antrice described that she felt a sense of “belonging” while in this hectic atmosphere. One of Antrice’s favorite moments as watching her work grace the runway while she was in awe back stage. Antrice’s dresses were constructed from double sided ridden latex with red latex trimming. One dress featured a hand painted, red mandala. The second dress was also made from latex and included a peplum detail, a harness like bra, and medal hardware embellishments. Antrice made new connections with up and coming designers as well as experiencing fashion week first hand.