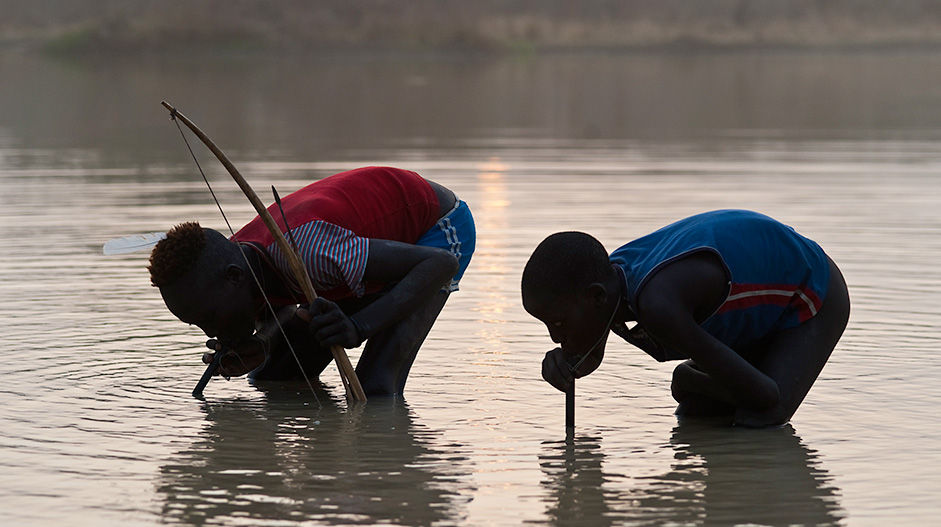 A 16-year-old female presents to the hospital with a burning sensation in her leg. There is a noted ulcer that she has been trying to alleviate with antibiotics. The ulcer keeps returning. Her travel history indicated she had traveled to a remote part of Africa the previous year to visit family. An x-ray is performed and shows subcutaneous linear calcification, typical of calcified Guinea Worm Disease. The calcified worm was surgically removed.

Guinea Worm Disease (GWD) comes from stagnant water sources where the larvae of the worm reside and are ingested by drinking the water. The larvae end up in the abdomen, where the female and male larvae come together, shortly after, the male dies and the female (as a round worm) migrates to subcutaneous tissue. She then releases her larvae through blisters in the skin. When infected individuals return to the water source with open ulcerations on the skin, the water is then re-contaminated with the larvae which starts the cycle over again. The parasite can be up to 1 meter long and cause horrible pain of the skin. The only way to get rid of it is to physically remove the worm from the site of infection. This is a painful process that can take months. Guinea Worm can incubate up to a year before causing ulcers in the tissue and can become calcified if not removed. Open sores are prone to secondary infections.

GWD, also known as Dracunculus medinensis or Dracunculiasis, is a nematode roundworm parasite that has almost been eradicated completely. Since 1986, infections with Guinea Worm Disease have dropped from over a staggering 3 million, to just 25 cases total in 2019.

There are still many ongoing efforts through the Carter Center which is an organization that helps to improve lives by preventing diseases. Founded by Former U.S. President Jimmy Carter and Former First Lady Rosalynn Carter, The Carter Center has built local, national, and international partnerships to help in the eradication of GWD. Eradication efforts are ongoing in five countries that are still affected by the disease which include South Sudan, Mali, Chad, Ethiopia, and Angola. Their strategy is to educate all affected communities about the transmission of Dracunculus medinensis and by providing community-based interventions to teach individuals safe drinking practices.

Currently a challenge that the Carter Center has faced in being able to completely eradicate GWD is the presence of GWD in domesticated dogs in Chad. They believe the dogs are getting infected through eating fish remains containing the Guinea worm larvae. To help decrease the numbers of dogs affected health volunteers have urged people in those areas to bury fish remains and are paying people cash rewards for reporting infected animals. Unfortunately, there are some areas of affected countries that do not have access to these programs and interventions due to conflict which makes it unsafe to travel. If those people cannot be reached and educated, eradication of the disease could become more challenging.

If GWD is ever fully eradicated it would become the second human disease in history to be eradicated and the first disease to ever be eradicated without the aid of a vaccine or medicine.