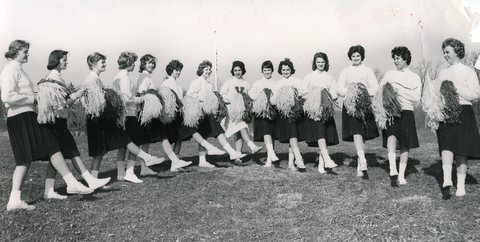 When back in 1961 the Villa Julie College cheerleaders were kicking up a storm, the world was rapidly changing around them. The cheerleaders, modestly attired in below-the-knee skirts and heavy sweaters, supported the two sports at VJC that year: field hockey and basketball. As reported in the 1961 yearbook: “Cheers from the sidelines often ring through raindrops but are always there hailing the team to victory.”

What’s interesting to public historians about this photo is that it provides four critical pieces of data: a date, a place, an activity, and a reasonable place to find a record of that activity. Where those fields intersect defines where the historian begins her search for the item’s contextual background. That contextual background is more commonly known as its story. The story is, in many instances, far more interesting, illustrative, and educational than is the item itself.

In the case of the photo above, the year was 1960, the place was Baltimore, the event was field hockey, and the record of the game could be found in the Baltimore Sun sports pages. However, before the reader ever got to the sports pages there were the headlines on the first page. While the game was reported in the sports section, the front page contained the context. The front page is our history jackpot. Its contents define what was happening in the world as the field hockey team was playing and the girls above cheering. It is a thumbnail sketch of our relations with each other both domestically and internationally. Whether we like what we see or not, it reflects who we were as a nation on that day.

If you looked at the Sun’s sports page on November 11, 1960, you would read about the VJC field hockey team defeating Baltimore Junior College by a score of 2-0. However, flipping to the front page you would see headlines about how South Vietnam had toppled its leader in a military coup, a leader disliked by the US Government. You would also read that on November 11th the president-elect, John Fitzgerald Kennedy, believed that a “new generation” of public servants would be given positions of leadership under his administration and that he was looking for young people who believed in a cause. You would also read that Richard M. Nixon, having lost the election, was unsure of his future plans in politics. His policy advisors admitted that a large part of his defeat was his inability to appeal to African American voters in the South.

None of the women pictured as cheerleaders in that 1961 photo would have had cause to imagine that within 10 years the US would experience the assassination of President Kennedy, that the fabric of our nation would be ripped apart by the Vietnam War, or that Richard M. Nixon elected as a two-term President of the United States.