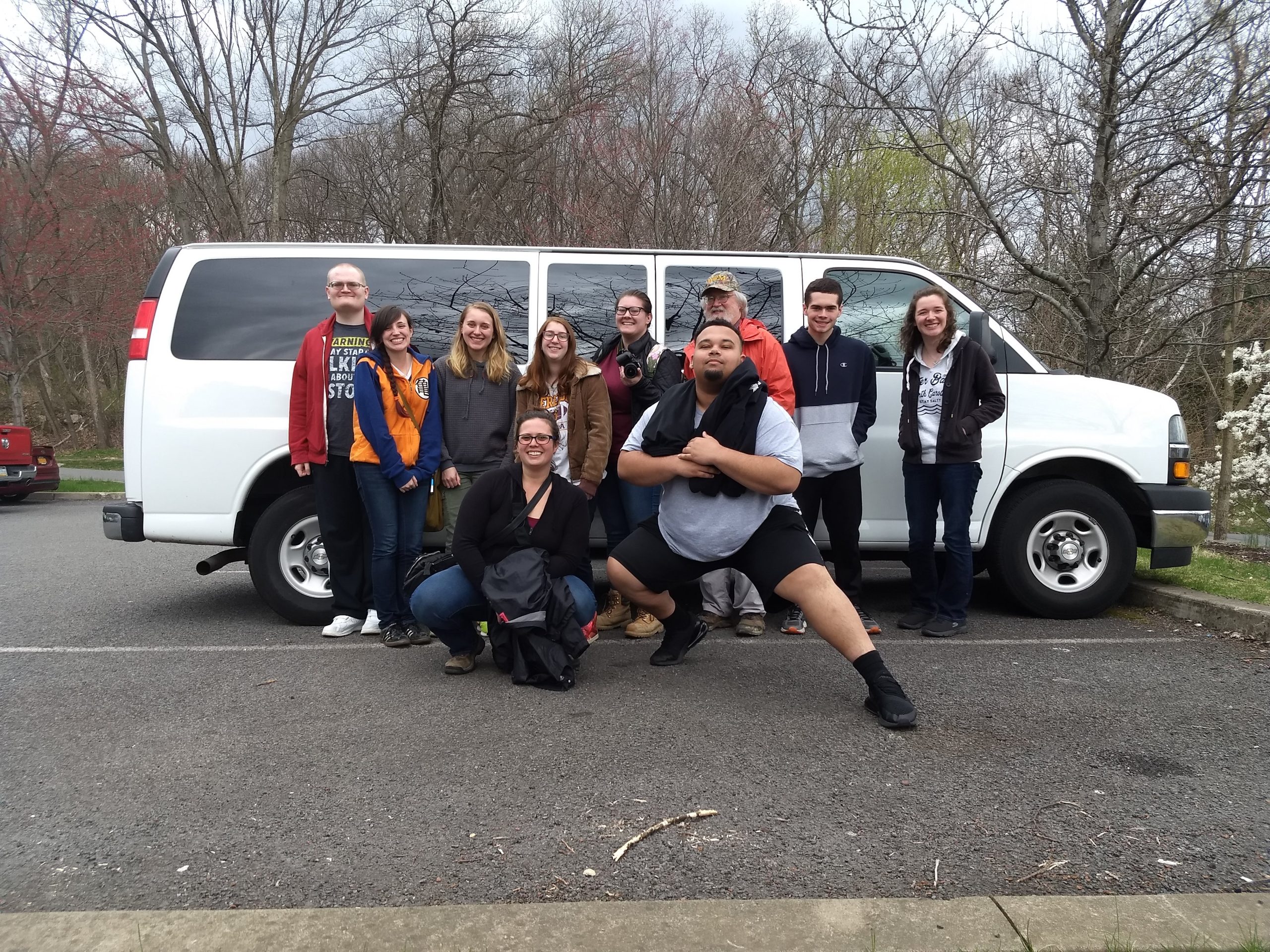 CAPTION: The intrepid explorers. Remember………..history is a license for adventure at Stevenson University.

Approximately 12 intrepid members of the program, both majors and faculty, hopped in a 15-passenger van and braved the interstates in order to have a great experience. Our plan was to leave campus at about 8:00 AM and arrive for in Scranton for lunch before our underground tour. Mission accomplished! We ate at a diner just across the street from the coal mine and were cared for by a great restaurant staff at Rich’s Restaurant. Good food, excellent service, and smiling faces.

After lunch we went over to the mine, purchased our tickets and hung out waiting for the tour. The waiting area has a number of educational exhibits, is adjacent to the gift shop, and has a small snack bar as well for those wishing a soft drink while they wait. This is also the area where you pick up your hardhat and adjust it to your liking. In about 20 minutes it was time for us to load into the railcar that would bring us more than 400 ft underground.

CAPTION: Hanging out and waiting for the tour to start. Good WiFi coverage, right near a snackbar, lots of exhibits, and the opportunity to take pictures of your friends in hardhats that are perfect for that embarrassing photo collage at the party. CAPTION: The low density rail car that we rode as it was lowered along a track about 300 ft underground. It descends at a pretty steep slope, so you will get to know your neighbor pretty well.

As we descended into the mine it became darker and darker and the sounds of running water increased. By the time we got to the bottom it was cl;ear we were in a very different world. We disembarked into a passageway about 15ft wide and 10ft high. It stretched far into the distance, and was lit by individual bulbs hanging from the rock above us. Floorboards provided a boardwalk along which we went on our half-mile journey.

CAPTION: The tunnel through which we have just walked strecthing far into the distance. Well lit, ventilated, and safe. Even those with mild claustrophobia were okay on the tour.

Our guide was well versed in the history and operation of the mine, and made the tour far more interesting than many people thought it would be. Through short stories he related, we learned about the geology of the area, the characteristics of mining anthracite coal, dangers to the miners, and the community that was supported by the coal business. The tour was well worth every cent spent on the admission fee.

CAPTION: At key locations along the underground tour were lifesize exhibits explaining how the mine was operated. Here we see a coal car with eight-tons of coal being pulled by a mule and directed by a young boy working in the mine.

After the tour we went back to our hotel, checked in, and headed out to a great meal at Marzoni’s Brick Oven Pizza and Brewery. Being a school trip we paid no attention to the brewing part of their name, but we cashed in on the pizza and other entrees. Day 1 down, it was time to move on to Day 2.

CAPTION: Our Holiday Inn Express room for two at the Scranton Airport. Clean, quiet, and on a rainy weekend very dry. Two majors to a room, all expenses paid by the department.