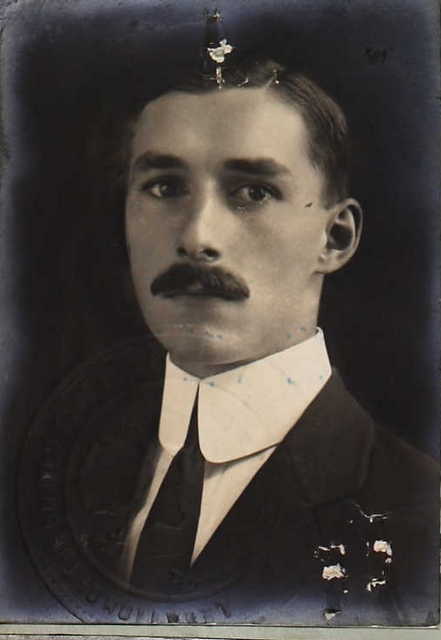 Ivan Finney Nock (from his passport request in January 1916).

Few know that the last US citizen to die in WWI while fighting for the French Foreign Legion was a Marylander from Harford County. The story began for the Stevenson Public History Program when a community member, having recently passed a memorial to Harford County’s WWI dead, noticed something odd. Amidst the privates, sergeants, seaman, captains, and corporals listed on the monument was a rank they had never seen: Grenadier. In not so many words they asked when the U.S. Army used “grenadier” as a rank as opposed to a function. Was there a time when grenadier was a rank but is no longer? The soldier’s name and rank were Grenadier Albert Finney Nock. Our investigation began.

Prior to the entry of the US into WWI, many US citizens joined foreign armies engaged in that war. Nock was one of 197 US citizens who volunteered to join the French Foreign Legion during WWI. Once the US entered the war, however, there was a great need for combat veterans in our not very experienced Army. By late-December 1917, France had agreed to remove all US citizens from the ranks of the Foreign Legion and place them under the control of the US Army. The date set for the last Foreign Legion soldiers to revert to US control was January 10, 1918. “I would really prefer to stay in the Legion,” said Nock. “I’m pretty sure no U.S. regiment will ever be as distinguished as the Legion Etrangere. Besides, I’m beginning to think I’m a Frenchman.” (Rockwell, Paul A. (1930) p. 283)

As was so often the case, Nock was true to his word: he was mortally wounded after he volunteered for a trench raid that took place on January 8, 1918. He died on January 9th—one day before he was to be forced to leave his beloved Foreign Legion. He was the last US volunteer to die in the Foreign Legion in WWI.

The French started the war with a belief in the tactics and strategies used by Napoleon a little over a century before. By 1916, when Ivan joined the Legion, the French had learned that those Napoleonic tactics no longer worked in the face of military technologies that had been developed between 1812-1914. Smokeless powder, rifles, machine guns, artillery, gas, and barbed wire had changed the battlefield. No longer did combatants rise from the trenches in long lines and try to attack in formation across no-man’s-land. Instead, small units of highly trained, seemingly fearless men were formed to infiltrate enemy lines. Some units carried automatic weapons in addition to their rifles. Others carried large amounts of hand grenades and used them to smother resistance in enemy trenches, dugouts, and shell holes. Whereas units with automatic weapons could be effective from 300 meters, those throwing grenades, the grenadiers, had to be within 30-40 meters of the enemy when throwing their grenades. To be a grenadier meant closing with the enemy and engaging him with the utmost disregard for one’s safety. Nock was a grenadier.

Nock in French Foreign Legion uniform at front in WWI.

Nock was assigned to combat duty beginning August 18, 1916, and things remained quiet until April 1917. In that month, the Legion engaged the enemy at Auberive. It was during this battle that Nock received his first wound. Hit in the head by a bullet while undertaking an assault as a grenadier, Nock was mentioned in orders for his bravery. Although evacuated and sent to the hospital to recover from his wound, he received the Croix de Guerre with a silver gilt star. His citation was mentioned in Corps Order #6 of June 13, 1917, and his valor recognized:

“A grenadier of admirable courage. Injured 4-20-17 by a bullet to the head. Having just slayed his fifth enemy before being wounded, he cried: ‘I will not leave here before having my sixth!’ [He] kept [his] promise.”

In August 1917, his unit was assigned yet another tough nut to crack. Once again, Nock was in the thick of the fighting and was wounded. He was awarded his second Croix de Guerre, this one with a bronze star. The citation was recognized in Brigade Order #100 on 10-6-17:

An elite grenadier possessing a superb disregard for danger. Taking part on August 21, 1917, in a perilous scouting mission, having protected with audacity the progress of this reconnaissance, and was wounded in the course of this operation.

Nock returned to combat on November 8, 1917. His unit’s next attack would lead to Nock’s death.

On January 8, the enemy position was subjected to four hours’ intense bombardment, the machine-gun nests and battery emplacements spotted by the aviators were knocked to pieces, and at l:50 P.M. the picked Legionnaires… left their shelters, crossed No-Man’s-Land at a rapid trot, and sprang into the German trenches. The dazed Germans offered little resistance; they were surprised, as they had not expected an attack because of the cold and deep snow. In some places the raiders penetrated almost a kilometer into the enemy lines…

“The raiders lost but six men killed, and a handful wounded. Among the latter was Ivan Nock, the only American to go on the raid. Just as he reached the German trenches his right arm was torn off near the shoulder by a shell. ‘Don’t bother about me. Carry on the raid, and pick me up on the way home,’ he told his comrades who halted by his side. For almost two hours Nock lay bleeding in the snow; then he was carried back to the Legion’s field hospital. The surgeons did all they could to save him. On the afternoon of January 9, 1918,… Ivan Nock breathed his last. The entire Legion mourned him as one of the bravest of the brave. A last citation in the Order of the Day paid homage to him as ‘an excellent grenadier; grievously wounded January 8, 1918, as he rushed upon the enemy lines under a violent barrage fire. Died as a result of his wounds.’

Nock was awarded his third Croix de Guerre, this one with a silver star. As reported in a letter from the French Ambassador to the United States addressed to Ivan’s brother, John, in 1932, Ivan was posthumously awarded the Medaille Militaire on 7 September 1922.