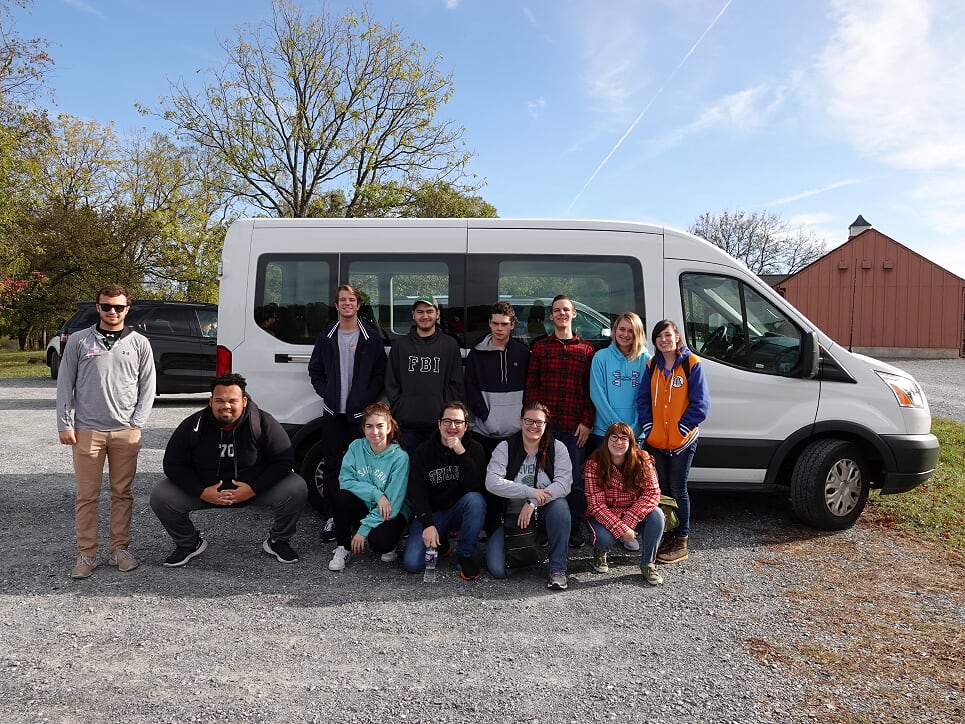 CAPTION: Stevenson History majors pose beside our valiant 15 passenger van that carried us 750 miles from Maryland to Virginia and back. (Photo: GT Johnston)

Each semester the history department tries to take an overnight trip to a different part of the Eastern Seaboard that is historically significant, has lots of things to do, and sounds like fun. In the past, the history program has gone to Williamsburg, St Michaels, Charlottesville, Brandywine, Scranton, and the Hudson Valley.

CAPTION: Jefferson’s summer home at Poplar Forest near Lynchburg. It was also his primary tobacco plantation. (Photo by G.T. Johnston)

Taking a trip during which you see Jefferson’s summer home at Poplar Forest in the morning, and his more formal home at Monticello in the afternoon provides opportunities for comparison and contrast. The two are owned and operated by different private organizations, so our students can compare different approaches to public history as well.

CAPTION: With a slight misspelling, the Timberlake Hotel welcomed us for a great night’s rest. Not a whole lot of frills, but great beds, warm rooms, hot water, clean linens, and a good breakfast. Ya gotta luv it!!! (Photo by G.T. Johnston)

Most of the majors loved their time at the Frontier Culture Museum in Staunton. In 1975, the idea arose for an expansive outdoor museum that would interpret the contributions made by settlers from England, Germany, Ireland, and West Africa on the Mid-Atlantic frontier in the 1700s. Today, the Museum operates as an agency of the Commonwealth of Virginia.

CAPTION: Two living historians interpret to visitors life on the frontier in the 1740s. He is using a drawknife to shape a pestle for his wife. The pestle is held by a shave horse. (Photo by G.T. Johnston)

The trip also provided opportunities for our majors to learn more about 18th century agronomy, especially with respect to tobacco. Maryland and Virginia had tobacco as their primary cash crop during that era, so, if you are going to do history about those two colonies you had better know about tobacco.

CAPTION: Tobacco growing at Monticello with buds and flowers at the top of the plant. (Photo by G.T. Johnston) CAPTION: These are what tobacco flowers look like at the top of the tobacco plant. While pretty, these flowers would have been removed in a process called “topping.” Similarly, as new leaves began to grow on the stalks later in the season, they would be removed as well in a process called “suckering.” It was thought that by removing the plant’s flowers and additional leaves it would center all of the plant’s energy on developing its large original leaves. These large leaves were prized, harvested, dried, packed in large barrels called hogsheads, and shipped to England (for Virginia tobacco) and Scotland (for Maryland tobacco) in order to to be sold. (Photo by G.T. Johnston) CAPTION: Tobacco plants grown at the Frontier Culture Museum are grown each on their own mound as they would have been grown in the 18th century. (Photo by G.T. Johnston)

Why is the Stevenson University History Program so unique? Because we do these kinds of trips at no additional cost to the students. Because we spend lots of time together having fun, talking about history, and helping each other. Because we get to know each other really well, not just as professor and student, but as individuals as well. Because history must be experienced– seen, tasted, smelled, and felt. Because history just can’t be learned in a classroom.

CAPTION: Nine of the twelve history majors that made the trip stand atop the mount upon which Monticello was built. Great students, great scenery, and a great trip. (Photo by G.T. Johnston)