Steaming into the past!!! 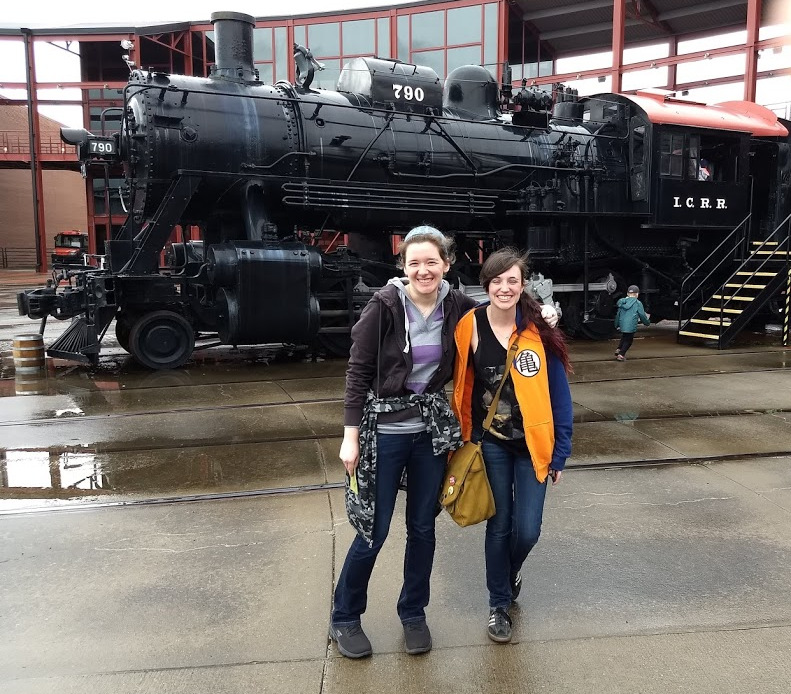 SU History majors recently learned about the Steam Era by traveling to Steamtown USA in Scranton, Pennsylvania as part of a weekend trip.

CAPTION: Two of our premier history majors: Jessica and Mina. They loved this locomotive since it reminded them of the Polar Express.

Learning about the Era of Steam often involves students reading textbooks and watching videos. Here at Stevenson our history majors learn about it by doing it. That’s the Stevenson History way.

CAPTION: Our train being put together and safety checked prior to our excursion.

Having gone underground to the Lackawanna Coal Mine tour the day before, our night at the hotel provided plenty of rest before this day’s outing. We had breakfast at the hotel, hopped into our 15-passenger van, and listened to Boxcar Willy, Johnny Cash, Tennessee Ernie Ford, and Arlo Guthrie sing about that long lost era as we drove over to the site. We arrived just as it opened at 10:00 AM and began to wander around.

CAPTION: The National Park Service operates a number of excursions, both steam and diesel, from Steam Town.

Run by the National Park Service, the site is devoted to learning about steam trains and diesel trains as they expanded around the US. The roundhouse area has some exquisite examples of locomotives and other rolling stock from a variety of eras.

CAPTION: The Round House at Steam Town with lots of rolling stock on display.

One of the really nice parts of the visit was seeing how kid-friendly the site was. It had exhibits just set-up for kids, and it had a room set aside for kids to explore the subject as well. NPS Rangers and volunteers were out in force answering questions, leading activities, and being helpful.

CAPTION: A crucial part of setting up any museum is to ensure that there are things people can reach out and touch. An example is this table of artifacts and the sign inviting interaction. CAPTION: A special room at the museum that is set aside for younger visitors. Furniture is their size as are the activities. Well done, National Park Service!!!

Mid-way through our visit we gathered for a ride on one of their trains and had a blast. Gathered together in a car dating from the 1920s or ’30s we slowly left the railyard and went for a short excursion out onto the rail byways of Pennsylvania. A great time was had by all.

CAPTION: One of the Steamtown trains on an excursion. (Courtesy of NPS)

Being a history major at Stevenson is a guarantee that you will be doing a lot of reading and writing. But……….that is simply preparation for going on the road and doing history. Remember, history is a license to explore. History is an adventure.

CAPTION: Some of our majors and faculty on our rail trip while at Steamtown. You can’t understand the past unless you work at trying to experience the past.