Photos from Stevenson’s Past 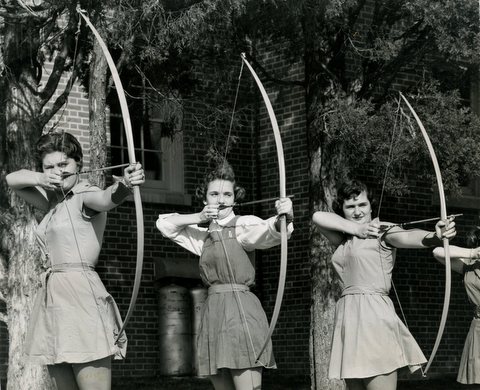 As a new feature of this blog, the Public History Program will be periodically placing the spotlight on old photos. If public history is all about storytelling, then photos and other images are of crucial importance in telling our stories. From the hallowed storage space of the Archives at Stevenson University comes our first photo blog.

Public historian that I am, I asked colleagues of mine some key questions:

Regarding the name of the outfit the women are wearing, I thought I would learn some fancy, arcane phrase I could put to use in a good game of Scrabble. Instead, most everyone who had to wear them seem to remember them simply being called “gym suits.” Evidently they were to be worn with bloomers of a matching color lest things become too risque.

Several of my informants made use of some rather indelicate language when describing them, evidently still traumatized by the experience of having them purchased in 7th grade by parents who expected them to last through senior year in high school. Comments from several informants were along the following line: My mother bought me my gym suit sized for 12th grade when I was entering 7th grade. Imagine trying to wear that thing with your bloomers hanging down around your knees because the elastic was too loose to hold anything up on your 7th grade legs. Then, in 12th grade, believing you had some strange tropical disease that caused you to faint– only in gym and only when engaged in exercise. Oh, it’s not a disease? It’s simply the fact that no blood can flow past those stupid bloomers that are acting like a tourniquet on your legs!

Once again, history seems to indicate we guys seem to have had it easy.

With regard to the second question about the transition from gym suits to t-shirts and shorts: Yes!!!! Evidently one of the effects of the feminist movement in the 1960s and 1970s was that women gained an equal right to wear pants, shorts, t-shirts, and other garb guys had been wearing in physical education classes for a century.

Every woman with whom I spoke who had lived through that transition applauded the changes brought about in gymnasium fashion. I can say that none of the women with whom I spoke mourned the passing of the gym suit-nor their experiences while wearing them.

The answer to my final question about physical education opportunities surprised me. In 1954, the women at Villa Julie Junior College engaged in field hockey, basketball, tennis, archery, bowling, and horseback riding. As described in the Villalog: “Autumn’s briskness inspires hockey players to test their techniques with the ball and stick, while winter’s chill chases the basketeers indoors. Aspiring archers carry their bows and quivers in spring’s sunshine, hoping to strike the unconquerable bulls eye. Dude riders, ready to explore the bridle paths, have an opportunity for riding instruction…”