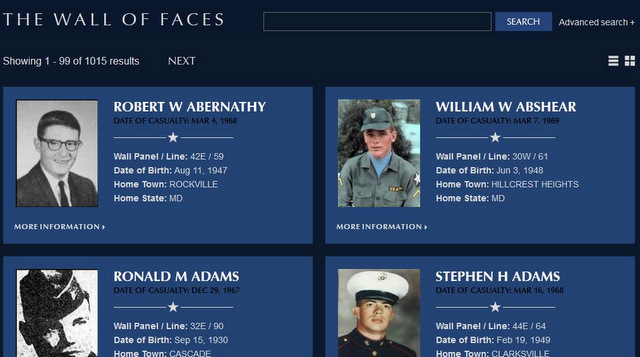 Four of the 1,015 Marylanders who died or are missing in consequence of the war in Vietnam (credit: Vietnam Veterans Memorial Fund)

The Stevenson Public History Program has volunteered to spend the next year locating photos of 190 Marylanders who died in Vietnam or who are MIA from that conflict. Although their names are currently on the Wall of Remembrance in Washington, D.C., their corresponding photos are absent from the virtual Wall of Faces presented on the Web by the Vietnam Veterans Memorial Fund. (http://www.vvmf.org/Wall-of-Faces/)

When those whose name is on the Wall of Remembrance are missing a photo, a standard image (seen below) is inserted in their corresponding entry on the Wall of Faces.

Above are six examples of 190 Marylanders missing photos on the Wall of Faces. When no personal photos are available, default iconic images are used.

We believe those who gave their lives in service to their nation should be remembered as individuals, and that the greatest individual trait we have is our face. Out of honor to those 1,015 Marylanders who served in the Vietnam War and never returned home, we have committed our time and effort until all 190 missing photos are obtained and forwarded to the Vietnam Veterans Memorial Fund for inclusion in the virtual Wall of Faces.

We are doing this as part of our involvement with Maryland Public Television’s (MPT) Vietnam Project. The MPT project involves two products: a three-hour documentary, Maryland Vietnam War Stories; and a two day public event entitled “LZ Maryland.” The film will tell the stories of Maryland men and women who served in uniform in Vietnam. Using the military slang designation for a helicopter Landing Zone (LZ), the event “LZ Maryland” will honor those who served in Vietnam and according to MPT “offer a long-overdue welcome home and thank you…”

Using the slogan of the Vietnam Veterans of America, the MPT Vietnam Project proclaims that: “Never again will one generation of veterans abandon another.” In the Stevenson Public History Program we believe: “The history of one generation is the responsibility of the next.”