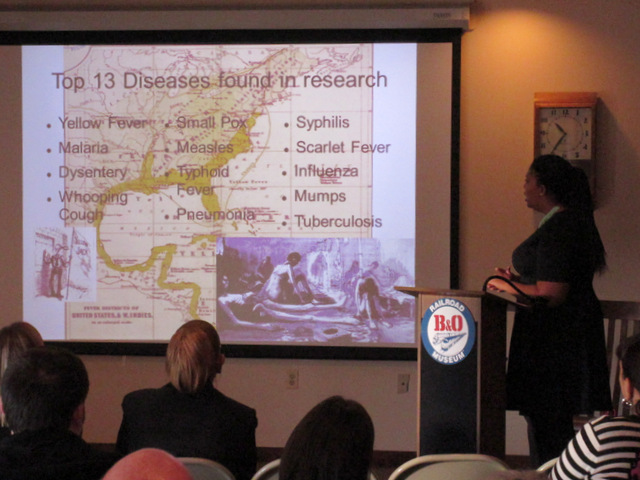 Alex describes the various diseases common in Baltimore in the 1700s-1800s.

Stevenson Public History major Alexandra Jeffries presented a public program this week that involved two museums, a train excursion, a lecture, and a tour. Her lecture took place at the B&O Museum in Baltimore and was entitled: Mourning Fetish, Obsessions with life, illness, death and dying 1600-1900.

The lecture portion of the program was attended by approximately 20 people on a Thursday morning of a business day in Baltimore. For those of us who attended, we learned about common diseases as well as the age at which an individual was most susceptible to those diseases. Alex explained how an invitation to pay respects would be distributed throughout the local community often in the form of cookies, gloves, or other objects bearing the deceased person’s name, date of passing, and the location where they were laid out.

Participants learned that the body would lie in the parlor of the family home until all who had been invited–many coming from out of town–had an opportunity to pay their respects. In the battle between the smell of the decaying body and the necessity to “freshen up” the air, chrysanthemums and lilies became the flowers of choice. Although today’s funeral sprays of flowers are aesthetically pleasing, it was interesting to learn their very practical purpose back in the day.

After educating us about disease, death, and mourning practices for 45-minutes, Alex led us out to the train on which we journeyed to Mount Clare mansion. Our train consisted of two passenger cars and a diesel locomotive. The car in which we rode was manufactured in 1949 by the Budd Company of Philadelphia. Named “The Hershey Ware,” it is one of several passenger cars donated to the B&O Museum by the state of Maryland that is currently used in the Museum’s passenger car service. The Hershey Ware was originally built for the Pennsylvania Railroad (PRR) as 21-roomette sleeper. After a 15 minute train ride, we arrived at Mount Clare the former home of the Carroll family who were such an important part of Maryland’s history.

As described on the Mount Clare Website: “On a rise in the center of Carroll Park in southwest Baltimore stands Maryland’s first museum house and one of the oldest and finest examples of colonial Georgian architecture in the city. A 1760 colonial Georgian home built by one of Maryland’s leading patriots… Mount Clare was the center of Georgia Plantation, a self-sufficient plantation with a diverse community… Mount Clare was designated a National Historic Landmark in 1971.”

Mount Clare, home to the Carrolls in the 18th-19th centuries.

“…The museum’s collection of nearly 3,000 objects from the 18th and 19th century includes paintings, furniture, and decorative arts… Today, Mount Clare Museum House educates the public about all aspects of life on an 18th century plantation including the lives of enslaved Africans and indentured servants.”

Alex provides background information for tour participants as context for what they are about to see.

On our tour, we focused on how the program delivered by Alex at the B&O Museum was indicative of the funeral and mourning traditions of the residents of Mount Clare. Surrounded by the splendor of the mansion it was easy to see in our mind’s eye how the home would have been transformed in a time of mourning. After our tour of Mount Clare, we reboarded the B&O train and returned to the B&O Museum in downtown Baltimore.

The entry way at Mount Clare where visitors can see a short orientation video. The bookcases contain historic books from the 18th-19th centuries.

Alex did a spectacular job of presenting her material and leading the assembled group on its tour. The volunteers of the B&O Museum and the Mount Clare House Museum were wonderful in their supporting roles and exhibited the graceful professionalism for which they are known. If you’ve never been to the B&O Museum or Mount Clare, I urge you to do so at your earliest convenience. Be sure to join one of their programs that involves traveling on a train between the two. It will be well worth your while.

The view north from Mount Clare with Baltimore’s skyline in evidence.