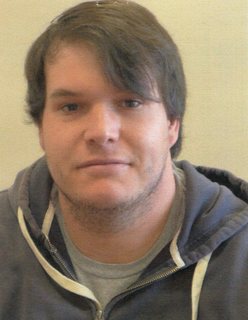 Mike MacFee, a third year Public History major, supported the Maryland Military Historical Society (MMHS) as an intern this past spring. While there, Mike accomplished a number of high value tasks under the guidance of noted historian Joe Balkoski and armory historical officer SGT Kelsey Sayson. Mike installed new database software used for the archives and museum, and entered all of the objects in the Civil Support, Global War on Terror, Desert Storm, and Enduring Freedom collections into that database.

Also, Mike inventoried and arranged hundreds of files regarding individual veterans of the 29th collected over the years, thereby making them more accessible to researchers. Finally, Mike was an active participant in the ongoing planning of the War of 1812 exhibit.The MMHS thanked Mike for his devotion to duty and for helping the MMHS progress in its ongoing mission of providing unparalleled opportunities for people to learn about the military forces of Maryland both today and yesterday.

On the personal side, Mike was raised in Carroll County and attended North Carroll High School in Hampstead, MD, where he earned numerous academic and athletic awards. He attended Bridgewater College in Bridgewater, VA for two years, where he studied History and Political Science and played two seasons of varsity football for the BC Eagles.

He also played a major role in establishing the club lacrosse team and laying the groundwork for the varsity Men’s Lacrosse program, which played its inaugural season in the spring of 2013. Mike transferred to Stevenson University in 2012. Prior to starting his internship at MMHS, Mike was balancing full-time course-work with full-time employment at a local retail store in Hampstead.

He currently carries a 3.3 GPA and is a member of the National Society of Leadership & Success. In the future, Mike hopes to continue his growth in historical scholarship and obtain a teacher’s certificate so that he can play a role in the development of coming generations of Americans.