History on the Run! 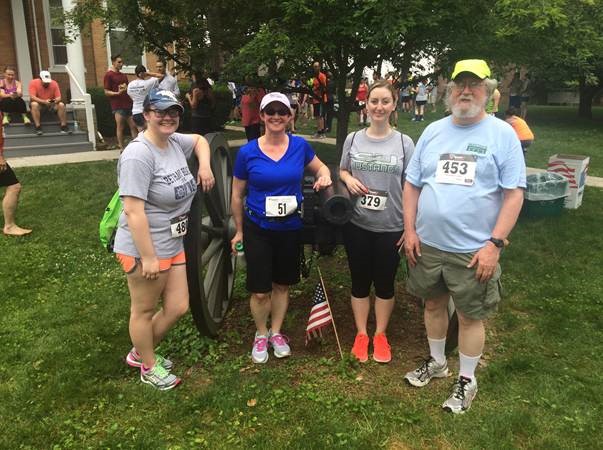 Stevenson Public History ran in support of empowering women and eliminating racism at a Gettysburg 5K on June 17th. Sponsored by the YWCA, almost 600 runners joined in the race. The event was part of the Outdoors History schedule of events described elsewhere in this blog.

The 5K course is a special one because it actually covers historic ground within the National Park Service’s Gettysburg battlefield. The race began near the main Lutheran Theological Seminary building whose cupola was used by Union and Confederate forces as an observation post during the battle. The course continued on over ground that witnessed ferocious fighting on the first day of the battle, July 1, 1863. About half way through the course, runners passed the Eternal Light Peace Memorial, dedicated by President Franklin D. Roosevelt in July 1938 as part of the 75th anniversary commemoration of the battle. Over 1,800 Civil War veterans attended the 1938 dedication. (The fascinating and controversial story behind the Peace Memorial is worthy of a blog entry all its own!)

The 5K provided the Public History participants the opportunity to experience the physical challenges of the July 1 battlefield without the additional challenges of musket and artillery fire! The 28th annual race will be June 16, 2018. So start training now!

As reported by the underpaid stringer and “boy reporter” for this blog, Professor Joseph McGraw.