Public History on the Road 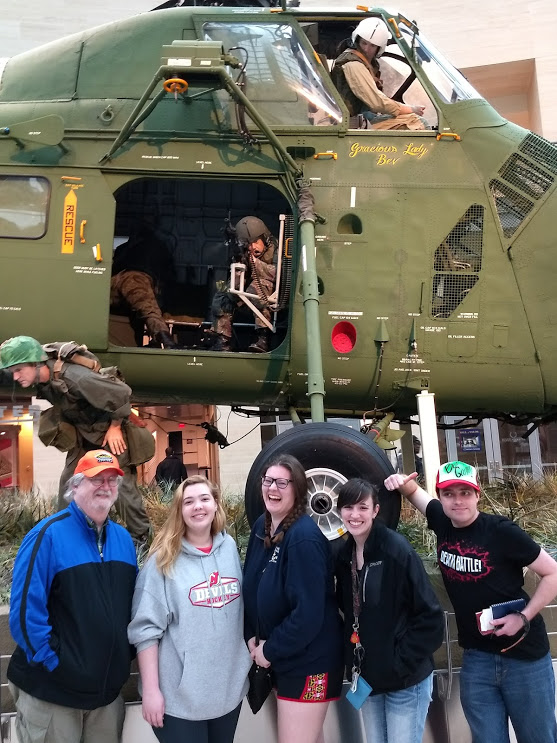 Caption: Several of us at the National Museum of the Marine Corps in Quantico, Virginia.

This past weekend the Stevenson University Public History Program was on the road again, doing what we do so well: exploring history.This time, our expedition of discovery took us to the hallowed grounds of Williamsburg, Jamestown, Guinea Station, and Quantico, Virginia.

In one weekend our majors were able to visit public history venues operated by the National Park Service, the State of Virginia, and two 501(c)(3) organizations. Along the way we engaged with professional public historians and learned about how they interpret history to the public, changes they have experienced in the last decade, the ethical issues they face on a daily basis, and how they feel about the state of the discipline. We watched as they practiced their craft, and we watched the public as they engaged with history. In all, our students got to spend approximately 15 hours knee deep in the discipline at world class venues.

Caption: An empty Williamsburg on a cold February morning.

Colonial Williamsburg was our first stop, and few venues do colonial history as well as that institution. For many people the highlight of Williamsburg is its main thoroughfare, the Duke of Gloucester Street, with its well maintained buildings and constant activity. For many of us, however, highlights lurked in the rarely visited corners of its grounds. In places like the brickyard, you could run into public history professionals with over 20 years experience each who were getting the yard ready for spring. Willing to talk about anything under the sun as they shoveled mud and leaves from their work areas, they provided uncanny insights into the prosaic occupation of making bricks. Their high school age helper from the previous summer was there as well just visiting. From him we gained a “behind the scenes” insight into the workings of Colonial Williamsburg through the eyes of a summer volunteer and a member of the fife and drum corps. It was easy to grab a shovel and help them muck out their work place as small talk gave us insights we could never gain in a more formal atmosphere.

Caption: The Williamsburg brick yard with the bricks having been stacked into a kiln that has burned for a week. Firewood stands nearby. The kiln is built of brick, fired, cooled, and taken completely apart. In a few weeks the kiln might not be there.

Later in the morning and into early afternoon we drove over to Jamestown Settlement. Operated by the State of Virginia, the Settlement has a different flavor than Williamsburg. Each interprets a different time in Virginia’s history, about 150 years apart. More than anywhere else we visited on our trip, Jamestown Settlement practiced experiential learning. Whether young or old, there was plenty to learn by simply seeing something, grabbing a hold of it, and trying it out. Whether it was putting on 17th Century body armor, hauling on lines aboard a ship, or simply opening a window, much could be learned by “doing history” at Jamestown Settlement.

Caption: The newest fashion for public history majors. Mina & Steph have fun at Jamestown Settlement. Remember– it’s all about the hands on opportunity to engage with history.

In early afternoon, we journeyed about 10 minutes down the road to Historic Jamestown. Operated by the National Park Service, Historic Jamestown is on the actual site Virginia’s settlers used for their first successful English colony in North America. Of greatest interest to our group was the archaeological research going on at the site. Few people know that archaeology is really a tool of the social sciences used by anthropologists. At Historic Jamestown it serves as a tool to better understand the site’s history. A perfect outdoor classroom for our majors to learn about collaboration, interdisciplinary field research, and the need to sometimes get really dirty, sweaty, and bug bitten in order to learn.

Having been on our feet for five hours at three different public history venues, it was time to take a break. We all loaded into our 15 passenger van and drove over to the nearby Jamestown ferry. Crossing the James River by ferry is a scenic way to get in touch with the earliest highways of the Chesapeake region– its rivers, streams, bays, and other water features. The 20 minute ride across the James provided opportunities to talk with other passengers to see what brought them to the area, what they thought of their experience, and a quick take on the public’s view of the various historic sites they were visiting.

Caption: Looking back toward Jamestown from the Jamestown Ferry.

The “eyes and ears” of Lee’s Army during the Civil War were associated with J.E.B. Stuart’s cavalry. He was known for not only finding the enemy, but for taking his cavalrymen on wide sweeping rides completely around Union armies. Similarly, once we debarked from the ferry, we were now on the wrong side of the James River. Instead of simply turning around, we embarked on a two hour drive exploring a part of Virginia few of us knew. It took us past Bacon’s Castle–the oldest brick building in the United States, Smithfield of ham fame, Newport News where ships have been built for centuries, Hampton– where the USS Monitor lies being restored, and Yorktown where the last major battle of the American Revolution was fought. All that was left to do was dinner.

On Sunday morning we left to head home. About an hour-and-a-half north of Williamsburg, near Fredericksburg, we stumbled upon the place where Stonewall Jackson died. Guinea Station, Virginia is where his death took place in a small white building next to a railroad station.

Caption: The Stonewall Jackson Shrine where he met his death at Guinea Station, Virginia. A National Park Service site. This is where we met “Ranger Pete.”

Our stop at the Stonewall Jackson Shrine run by the National Park Service was a huge– and unexpected–success. As we pulled up to the small white building, it was rainy, gray, and cold. The parking lot was empty. There appeared to be no reason we should expect anyone to be at the building on this particular Sunday, but we all got out to take a look. A small sign informed us that the building was open. We entered the dimly lit building to find Ranger Peter Maugle reading a history book in a small side office. Of all the public history professionals I met this past weekend, “Ranger Pete” impressed me the most. Quiet, slight, with twinkling eyes, he talked with us for about a half hour. We spoke of Stonewall Jackson, the ethics of commemorating- versus celebrating– Confederate soldiers in our current environment, the experience of being an NPS historian, and the personal path Peter took to his current position. Nothing was off-limits in terms of our discussion as long as it was reasonably related to public history. After about 45 minutes we bid him farewell and drove the 10 miles back to I-95 along a peaceful secondary road.

Caption: Ranger Pete Maugle talks to us in the dim light of the Stonewall Jackson Shrine.

Driving north another half hour brought us to Quantico, Virginia, home of the National Museum of the Marine Corps. Its one of a kind architecture that reflects the iconic angular nature of the Marines raising the US flag atop Mount Suribachi on Iwo Jima draws everyone’s attention along nearby I-95.

Caption: The National Museum of the Marine Corps. Its architecture is reminiscent of raising the flag on Iwo Jima in WWII.

This museum is probably one of the finest in North America when it comes to best practices in public history. The exhibits are first rate, wonderfully executed, and easily understood. Effective use is made of music, video, and images in a way that makes complex topics more accessible. The museum has placed a lot of effort into making sure there are plenty of hands on activities for young visitors, as well as places for kids to congregate and play.

Caption: A USMC F4U “Corsair” hangs from the ceiling of the museum along with several other aircraft. Caption: Battlefield mobility for the Marines in WWI. Caption: A display honoring the US Marine Corps Band.

By the time we had spent an hour-and-a-half there, we realized we all wanted to go back later in the semester for a second look when we were a little fresher. Two hours later and we were back home in Owings Mills, Maryland.

While our biennial three day expedition is an expensive one, approximately 75% of the cost is covered by the department. We believe it is crucial to our program because it introduces our students to public history outside of Maryland and Washington, DC, and it provides an opportunity for our students to speak with a wide variety of professionals in a one-on-one setting. Our majors get to see how public history is done in world class institutions, and it keeps our majors up to date on emerging trends in the field. Furthermore, it advances the reputation of our program.