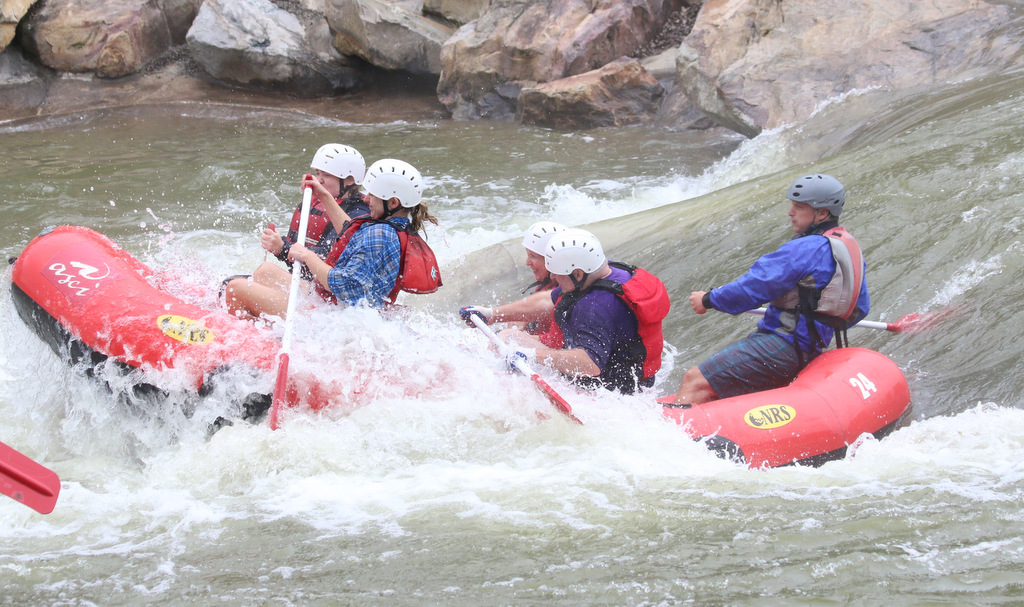 Recently an intrepid group from the SU Public History Program set out for Western Maryland. Our destination? White water!!!

We had as our mission conquering the white water runs at Adventure Sport Center International (ASCI), located near Deep Creek Lake, and part of the Wisp ski resort. The world’s only mountaintop white water rafting environment, the ASCI course was designed for use by international competitors at the Olympic level.

Entirely manufactured by humans, the artificial white water course runs about 1 kilometer. But in that short distance it packs a punch. Approximately 15 rapids with drops of 5-12 feet result in that white turbulent froth so sought after by adrenaline junkies the world over.

Caption: Not all of the riding was in the raft. There are parts of the course you can get out of the raft and jump into the rapids from boulders along the water course. You shoot the rapids feet first on your back. Alex, in the program for two weeks, literally jumped at the opportunity!

The adventurers from SU consisted of PHIST majors Alexandra Reed (’22) and Stephanie Czeslowski (’20), Professors Joe McGraw and Glenn T Johnston; and white water enthusiast M.J. Johnston. As we drove west through increasingly heavy rains, the temperature dropped each mile. By the time the team arrived at ASCI the temperature sat at a chilly 55 degrees F. After checking in, each member of the crew drew their safety equipment: personal flotation devices and crash helmets.

For roughly two hours we had the time of our lives! Although the air was chilly, paddling rapidly warned us up. As the water broke over the bow and soaked us, we felt like we were in the best waterpark in the world. After each run, we paddled the raft over to a huge conveyor belt that lifted the raft and us to the top of the course for another run. All in all, we made about seven runs that day.

The best part of the trip was that it wasn’t undertaken solely for fun. We accomplished three major objectives:

Caption: Many thanks to Tim, our guide, for the best afternoon in a long time. Our program makes about four field trips per semester. In the past, PHIST majors have hiked in National Parks, canoed in Harford County, toured the Gettysburg National Battlefield on horseback, and sailed a skipjack on the Bay.