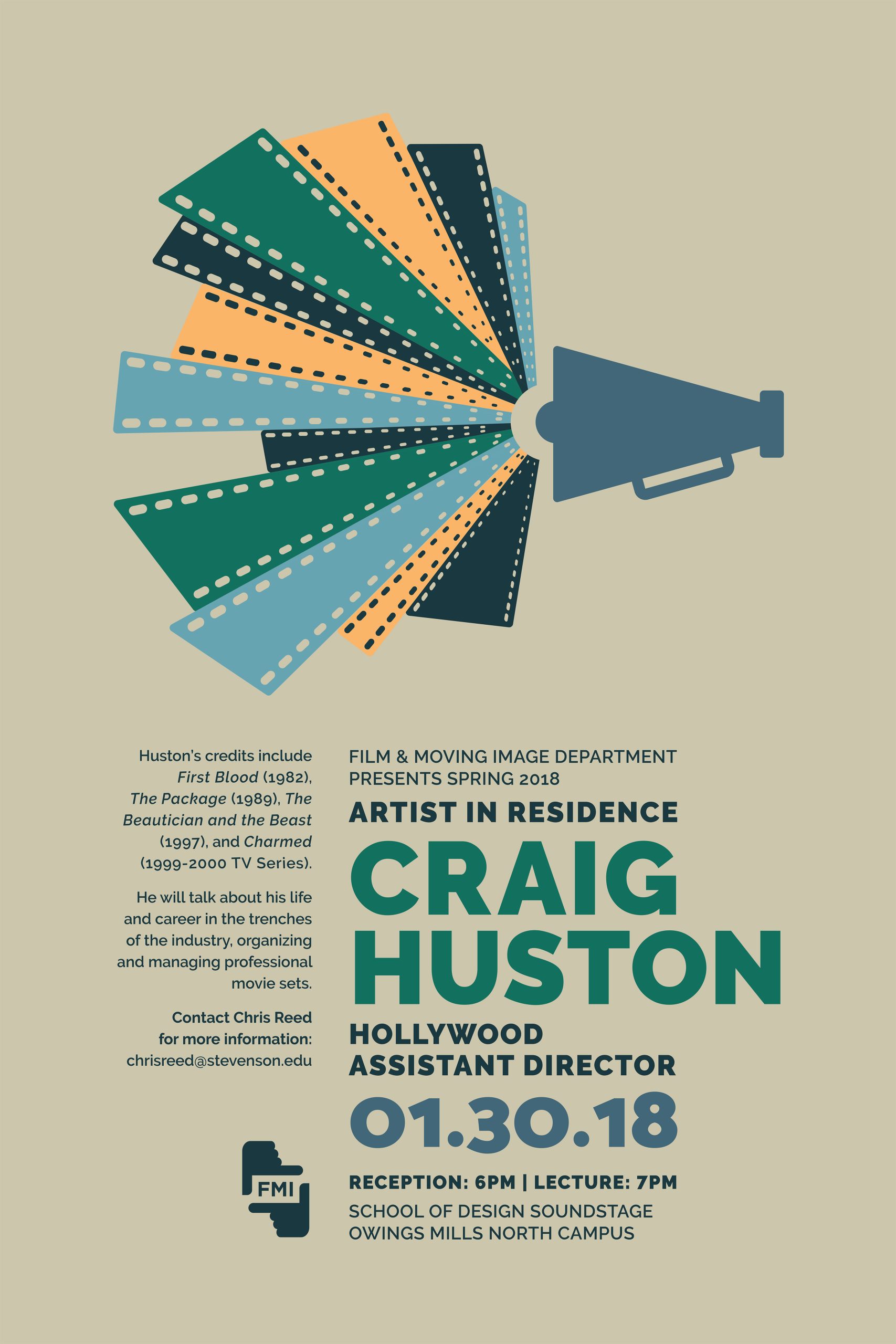 Longtime Hollywood Assistant Director Craig Huston is the Department of Film & Moving Image’s Artist-in-Residence for the Spring 2018 semester. He will be on campus from Monday, January 29, through Wednesday, January 31. On Tuesday, January 30, at 7pm, in the Soundstage (SD101) of the School of Design building on our Owings Mills North Campus, Mr. Huston will deliver a lecture on his life and career. There will be a light reception in the lobby of the building at 6pm. All are welcome. The event is free of charge. In addition to the lecture, Mr. Huston will attend many classes while here, during which he will offer shorter versions of his popular “Pro Ad Seminar.”

Assistant Directors, or ADs, are vital and integral parts of the filmmaking process. Their role, among other things, is to organize and run film sets, working in consultation with the director, producer(s), and others to allow the creative process to flow as smoothly as possible. Mr. Huston explains it best, on his website:

Every professional film, whether major studio or independent, has a team of Assistant Directors. They are the movie’s coordinators, communicators and problem-solvers; the most visible and vocal leaders during both pre-production and filming. They create the shooting schedule; they lead location scouts and production meetings; they run the film set and supervise the crew; they direct background action (extras); they create call sheets, production reports and other required documentation; they ensure adherence to union & guild regulations; they are responsible for cast & crew safety.

Indeed, without ADs, the movies and TV shows you know and love could never have been made. We therefore welcome Mr. Huston back to Stevenson (he came once before, in the Fall of 2011, for a different kind of presentation), knowing that he will impart a lifetime’s worth of essential knowledge to the next generation of filmmakers.

Craig Huston has an extremely impressive biography, selections of which are below (quoted, again, from his website):

Craig Huston has been a Los Angeles-based First Assistant Director for over thirty years and has more than sixty screen credits as First AD on feature films, television movies, mini-series and episodic TV series. He has served as First AD to Academy Award-winning directors Stanley Kramer, Tony Richardson and Ron Howard, Emmy-winning directors Roger Young, Daniel Petrie and Joseph Sargent, and dozens of others. Early on, he served as Second AD to actor/directors Warren Beatty, Sidney Poitier and Clint Eastwood, among many others.

His work has included Hollywood studio films and TV shows but his specialty has been distant-location shoots. His projects have included filming in twenty-one states plus twelve foreign countries, including challenging assignments in Russia, Morocco, Croatia, Thailand and Malaysia.

We look forward to an exciting visit!