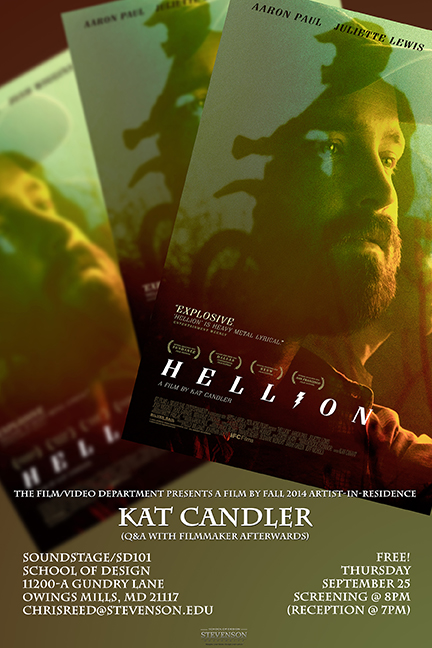 From Wednesday, September 24, through Friday, September 26, Stevenson’s Department of Film/Video will host filmmaker Kat Candler as our Fall 2014 Artist-in-Residence. Ms. Candler will spend her time here visiting classes, talking about her work and her success at adapting her Sundance-accepted short film Hellion into the award-winning feature of the same title. We will screen that feature on Thursday, September 25, at 8pm, in the Soundstage (SD101) in the School of Design building (located at 11200-A Gundry Lane, Owings Mills, MD, 21117). There will be a reception prior to the screening, at 7pm, in the School of Design lobby, and a Q&A with Ms. Candler afterwards. Both the reception and the screening are free and open to the general public.

Ms. Candler is now working on adapting another of her shorts, Black Metal, as her next feature. Since all of our students graduate with a number of completed short films under their belt, which they use as calling cards as they pursue careers in the field, we think Ms. Candler is an excellent role model to show them how it’s done. In addition, since Ms. Candler is also an educator – a lecture at the University of Texas, in Austin – we know she will be able to translate her experience into accessible lessons. What is especially impressive about Ms. Candler’s most recent achievement is how she was able to cast Aaron Paul (of “Breaking Bad“) and Juliette Lewis (whose credits include Cape Fear, Natural Born Killers, The Other Sister and, more recently, August: Osage County) – actors of quality and renown – in this, only her third (and first high-profile) feature-length movie. We can’t wait for her to arrive and share her invaluable life and career knowledge with our students.