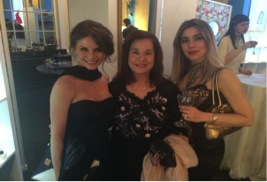 As many current SU students know, it is “sadly” Sally DiMarco’s last semester with us as she is retiring in June. For those of you who don’t know, Sally Dimarco is the head of the Fashion Design Program at Stevenson. Sally grew up in Italy, and her family had a fashion design school, and almost all of her family was in the fashion business. The Dimarco family decided to move to Baltimore as it was a significant area for designing and manufacturing men’s apparel at the time.

Sally’s fashion design interest began in high school, although at first she considered going to medical school since she had a passion for science. She decided on fashion and graduated from the Maryland Institute College of Art with a degree in Fashion Design and Fine Arts. She worked in the couture industry in Baltimore as well as retail management. She always wanted to teach and earned a graduate degree in education at Johns Hopkins University. She taught at, and oversaw, the Fashion Design and Merchandising program at Baltimore City Community College for 32 years.

Sally is also an accomplished writer and wrote the book, Draping Basics. Sally has also taught at many other universities such as Southwest Missouri and Delaware State. Sally was recruited by Stevenson to create and manage the fashion design program which is in sixth year. Sally is proud of the fashion program. It ranks number 15 for fashion programs in the United States and has 19 technical classes. Students showcase their original designs at New York Fashion Week once a year and always produce an amazing fashion show at the end of the school year. Her advice for incoming fashion design students is “classes are not easy, so be prepared for a lot of work and to focus”.