Learning About the Historic Trades as a Career 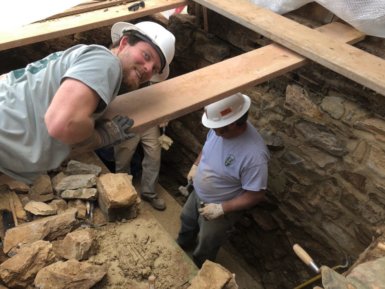 The Stevenson University History Program recently visited with the the National Park Service Historic Trades Preservation Center to learn about their apprenticeship program in the traditional trades.

The Traditional Trades Apprenticeship Program (TTAP) came about through the realization that the National Park Service needs workers with specialized skills to preserve and maintain the buildings and structures in our national parks and historic communities. To help meet this need, TTAP (pronounced “tee-tap”) was created.

Located in in Frederick, Maryland, about an hour away from Stevenson University, TTAP is unique within the nation. It provides hands-on training in historic preservation skills to people interested in pursuing a career in preservation with the federal government. During an intensive six-month apprenticeship experience, TTAP passes onto the next generation the skills that will allow the important work of preserving our cultural heritage to be continued. During a time when many of these skills and trades are becoming obsolete, TTAP teaches the traditional trades in their modern form, trades that require much of the same materials, tools, ingenuity, skills, and hard work that have been required for generations and can never be replaced.

Trips like these are what the Stevenson University history program is all about. Yes, we do all of the standard classroom work in US history, but that is simply the work necessary to placing hands on experiences in the field within context. It is our program’s job to introduce you to these experiences. It is your job to determine whether you would like to take advantage of those opportunities.