A Preview of Coming Attractions … for the 2020 FMI Senior Showcase 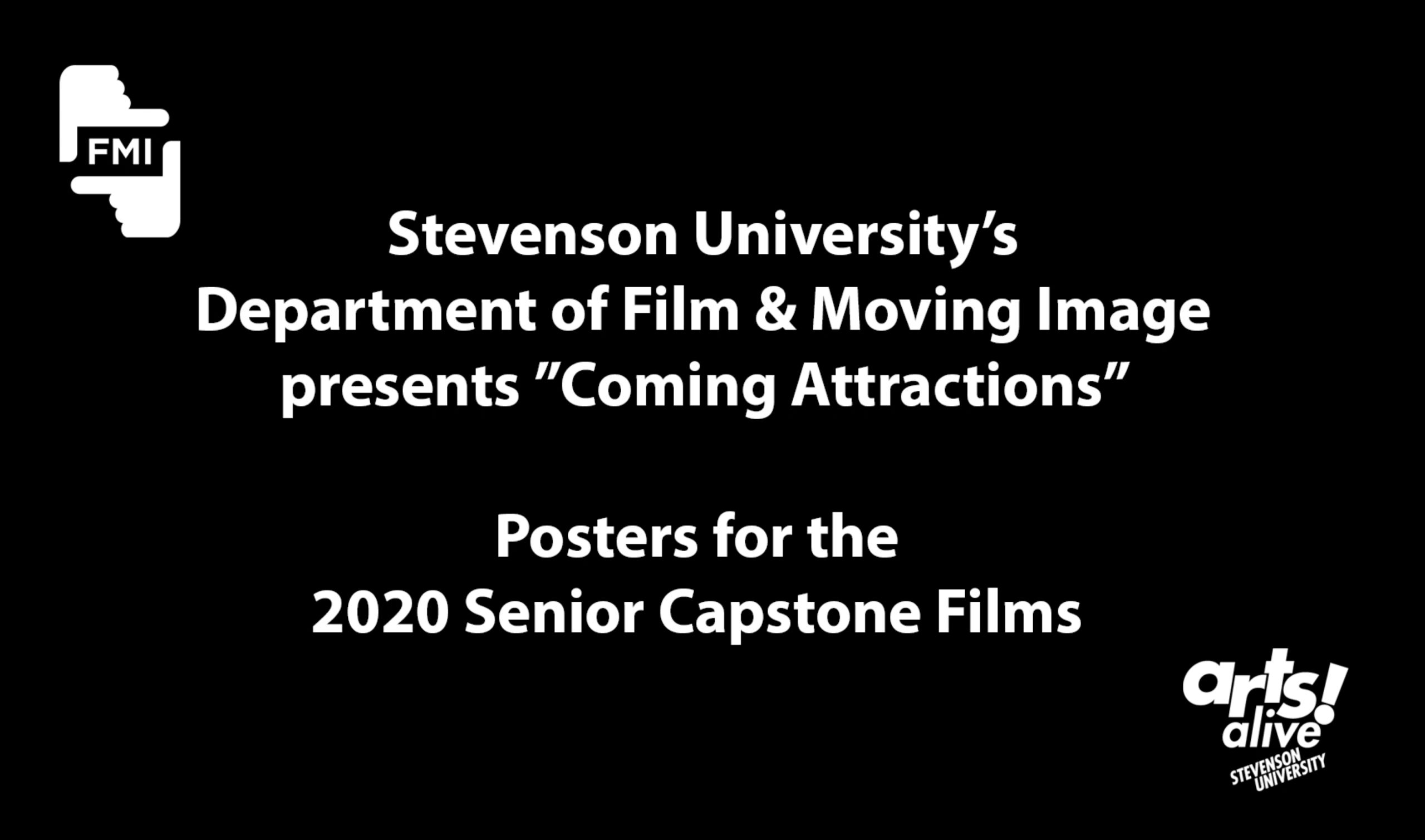 The annual Film & Moving Image (FMI) Senior Showcase features capstone work from the graduating majors. Students work as writers, directors, producers, cinematographers, editors and more. Before we screen the films, however, we always like to offer up a preview of these wonderful coming attractions, via the specially designed posters for each film. Normally, these posters would be displayed in the gallery space of the School of Design, but this year we present them virtually. Click on the above image to be taken to our Vimeo site to watch a short video of all the posters, or click on the thumbnails, below, to see each image in higher resolution. The actual showcase, itself, will take place on Tuesday, May 12, starting at 7, screened live on our YouTube channel (playlist will be activated just before the livestream). So mark your calendars for a night of great cinema!

Death by Misadventure B-Manifesto (Dustin Acevedo, director)
During the journey of trying to make a b-movie action feature, we are led on a documentary of the behind the scenes process.

The Body Disposers (Dylan Borcherding, director)
Caleb and Lloyd discover that the body they’re disposing of is actually alive and that they’re now being chased by a corporate businessman.

Colour Blocked (Shomari Fortson, director)
Three artists of different mediums all struggle to receive criticism on their respective crafts, resulting in creative shifts within themselves.

Trick or Bleat (Evan Gloyd/Jimmy McDonald, directors)
Gabrielle has just moved into a quiet, suburban neighborhood in Maryland when she is forced to confront a violent, masked intruder, who bears an eerie resemblance to the local legend of Goatman.

Kingdom of One (William Johnston/Robert Morison III, directors)
Nolan, a soon-to-be father of two, finds his life turned upside down when he realizes his reality isn’t really real.

The Perfect Student Film (Jarred King, director)
A film student is hounded by a supernatural being who is attempting to make his life the “perfect film” in order to teach him how to be a great director.

Single mother Eve is plagued by harmful moth-like creatures and hires Myrtle, a professional in otherworldly pests to get to the bottom of this. What could Eve’s strained relationship with her daughter, Rosie, have to do with it?

Forgive Thy Angel (Jaclyn Mayne, director)
An angel named Alan thinks God is too forgiving. God tells him to go to Earth and convince a teenager to pray for forgiveness within one week.

The Madness in the Grooves (Dylan Mehring, director)
Clark, a record-store owner, begins to see visions of a world beyond human comprehension when he listens to a record he recently purchased. He and his friend Justin must figure out the meaning of its powers as Clark loses grip with reality and descends into the record’s horrifying world.

Salad Days (Jenna Miller, director)
Salad Days is an experimental film that takes a close and intimate look at growth within one’s childhood, examining distant memories which expose both the good and bad emotions of growing up.

Surround Sound (Erin Orwig, director)
A short drama following a young high school student, Charlie, who—after her headphones break—is forced to confront cheating. She is challenged to choose if ignorance is truly bliss and to determine what is worth standing up for.

Alang and David (Mark Perry, director)
A short documentary about Alang, a medical worker who frequently returns to his community in Africa’s Cameroon to give aid, and his relationships with his patients.

A Doll’s World (Mariam Salahvarzi, director)
A short narrative film that follows a young woman, Margret, through her daily routine. As the film progresses, her routine has slight changes that are out of norm. It is later revealed that Margret is living in the imagination of a young girl, Sarah, and her dollhouse.

The First Inning: No Gloves, No Problem (Allie Sheedy, director)
Everyone knows what modern-day baseball is like, but what was late 1800’s baseball like? What were the uniforms like, or the rules? In Vintage Baseball, we answer that for you by looking into a league that still plays the all-American game using 1800’s rules!

A Soldier’s Pain (John Travers, director)
A retired Army Veteran experiences PTSD over the death of his fellow soldiers. With the help of therapy, and the support of his wife, he must learn to let go of his guilt

An Acquired Taste (Lexxiana Zollicoffer, director)
Violet moves to a new town and joins a book club in hopes of meeting new people but is forced to relive her dark past as she learns that the club is not what it seems.