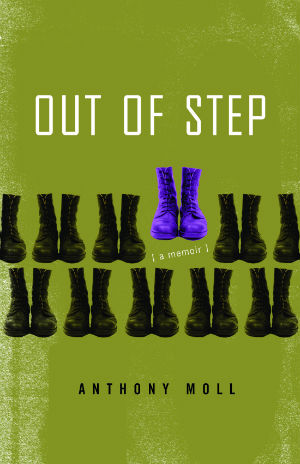 Anthony Moll’s reading of his memoir Out of Step was inspiring and educational on many fronts. He has a plethora of experience that he spoke about during his reading, all of it culminating in the person he has become today and the memoir that stole my heart and took my breath away. He coupled his compelling story with a beautiful writing style that borders on poetic to bring his readers and listeners a dynamic and immersive experience into his life.

Moll’s reading led us deep into his personal life. He presented his story in such a way that, by the end, I felt like I knew him not only as a writer but as a person. He had a very open, honest, and conversational manner when he addressed the crowd. He was informative on topics that might have otherwise remained unclear to people, such as the “Don’t Ask, Don’t Tell” law and his time with the Human Rights Campaign. He left nothing to be desired in his facts. He also spoke about how he went around getting his story published and a little of his writing process and writing experience. Anything people could have possibly had a question about he addressed clearly in the beginning of his reading. He was very thorough on this front.

The open, honest, and conversational manner also applied when he spoke about his “coming out” story. The way he presented his past framed it in a way that we as the audience were able to feel much more connected with him by the end. His whole memoir gives us an insight into his life but he also was not afraid to open up even more and connect this in his story to other parts of his life that were not written about.Not only did he give the audience strong background of his work and a moving reading, he also interacted well with the audience. He was personable and friendly and a very good speaker. He kept the attention of the audience and gave us a strong idea of who he was as a person and as a writer.