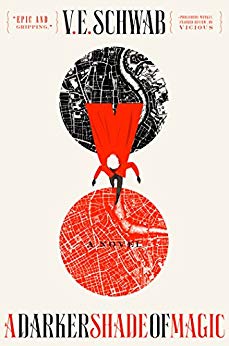 The Greenspring Review met for the first time as an official club on February 7th. To kick off the spring semester we have started a book club. There were over twenty-five books suggested by members and some really great discussion about things that we enjoy reading and even got into some off-topic conversation about book-to-movie adaptations that we can’t stand. The meeting itself was a great success and we voted on reading A Darker Shade of Magic by V.E. Schwab for our first book. This was a suggestion that I had made because of how incredible Schwab’s world building is and how intricate her characters are.

A Darker Shade of Magic is the first book in a trilogy and it is set in London in the 1800s. But this is no ordinary historical fiction novel. London exists across three parallel worlds. Only the Antari- magicians with rare magic- are able to travel between Red London (a sprawling, thriving city lush with magic), White London (a cold, power starved city), and Grey London (a magicless city). The story follows Kell, adopted brother of the prince of Red London and one of the last Antari, as he moves between these cities. He smuggles artifacts between places, which has been illegal since the doors between cities were shut. It’s a story rich with magic, adventure, characters who you will love and adore, and characters that will make you want to crawl inside the book and tear apart yourself.