English Club is impressed by “The Shape of Things” 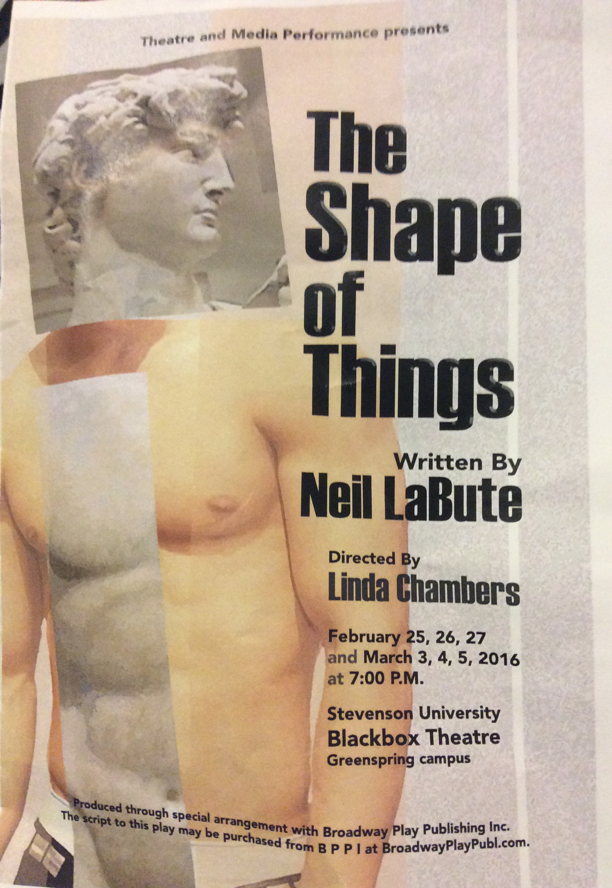 On March 5th, English Club went to see “The Shape of Things,” at play held at Stevenson University’s Blackbox Theatre, for their last showing. The play was spectacular. It had a really intense story-line combined with great acting and showmanship. The set was a “round about,” which forces the actors to move around on stage and pay attention to the directions they are facing. The stage had weird shapes to it, but the audience was placed at all sides of it, and therefore the actors had to face all of the different directions while acting. The use of the “round about” stage intensified the effect the play had on its audience members (English Club specifically).

The play itself was made up of four actors, two acts and nine scenes all together. The four actors made up two couples, with the main focus on one of the couples where the female character was molding her boyfriend into being her art project. No one knew what was happening until the end scene where the female had an art show where she revealed everything to the other three characters. In the end, everyone ended up breaking up and the main male character found out that his entire relationship was a lie.

Being one of the audience members, I tended to look around at the reactions of others around me, and during this play when I did that, I saw looks of shock, awe, bewilderment and humor, all at different moments. “The Shape of Things” made a statement about art, but also made a statement about love and affection; every thing we do, see, hear and feel are subjective. This play was an interesting one and I am glad that English Club went to see it together. Too bad it was the last showing because I definitely would have seen it again.