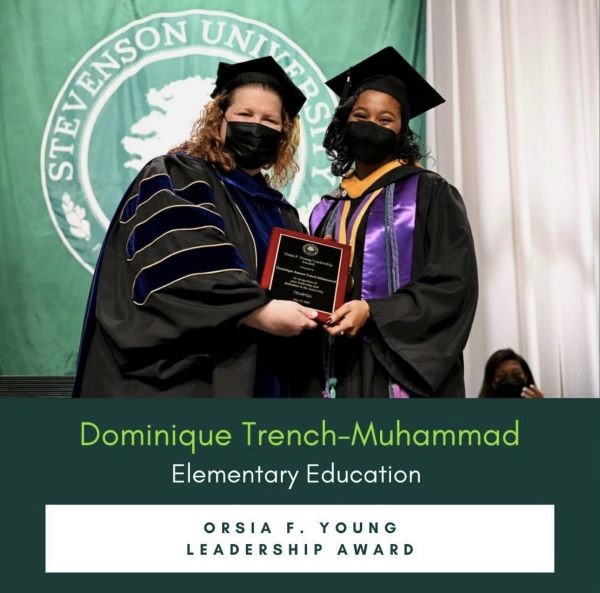 Dominique Trench-Muhammad, Elementary Education, was awarded the Orsia F. Young Leadership Award for outstanding leadership. During her four years at Stevenson, Dominique has held key positions of leadership in the School of Education and the University community. In 2020 Dominique became the junior President of the Psi Omicron Chapter of Kappa Delta Pi (an International Honor Society in Education) and Vice President and Treasurer of Teachers of Tomorrow (Education Club). She became Kappa Delta Pi President in 2021, including serving as the Chair of the Community Service Committee. Dominique, along with other junior and senior KDP Officers wrote program proposals that resulted in the Psi Omicron Chapter earning their fifth Achieving Chapter Excellence (ACE) award. Among other achievements, Dominique was on the Dean’s list from 2019-2022 with a GPA of 4.0. She was the recipient of the Teaching Fellows for Maryland Scholarship and the J. Jay Hostetler scholarship. Dominique also worked at Stevenson as an Orientation and Welcome Leader (Owl).

Grace Hollin, Elementary Education, was awarded the Dorothy Stang Award, conferred on one graduating senior who best exemplifies devotion to the good of the wider community as reflected in the life of Dorothy Stang, a member of the Sisters of Notre Dame de Namur, the founders of Villa Julie College (now Stevenson University). During her four years at Stevenson University, Grace Hollin was an exceptional student holding a 3.67 grade point average in the School of Education. In recognition of her excellence in the internship classroom, Grace was named a 2022 Maryland Teacher of Promise. As a first-year student, Grace wanted to share with young learners about how to participate in service and help refugees in her local community. She organized the gathering of supplies, and her and her student furnished 70 backpacks full of supplies for Baltimore city refugees. In her sophomore year, Grace helped the Mustangs for Freedom Wage organization raise awareness and money to help with the issue of human sex trafficking. She and a peer created a “pop-up thrift store” which raised several thousand dollars to be donated to this cause. During the pandemic, Grace raised and organized supplies for approximately one hundred Baltimore student (donating a $500 gift card given to her by her job). She also worked with the Student Support Network and the Community Crisis center to distribute weekly emergency food supplies at Owings Mills High School. During her senior year, Grace led a service project with her Stevenson field hockey team, putting together a canned food drive that collected over four hundred cans worth over a thousand dollars (she also won the Mac Sportsmanship Award). In addition to the aforementioned service, she collected supplies for social services, provided respite care for foster parents, and (through her church) facilitated a middle school “Gollege Girls’ Group” and currently leads a “College Young Adult’s Group.”

Grace Chaffe, Elementary Education, was the recipient of the President’s Award for Scholarly and Creative Achievement. Grace has the distinction of being a University Honors Service Scholar while concurrently pursuing a commission in the U.S. Army reserve as a cadet in the ROTC program at Johns Hopkins University. Completing these programs required exemplary scholarship, extraordinary creativity, and a level of dedication that exceeded all expectations for an undergraduate student. In her junior year, Grace completed an Honors Art and Literacy project for which she created a 3D canvas expressing literacy in art, and for her senior year Honors project designed and implemented a game, “Discover your Philosophy of Education.” In her sophomore year, she volunteered with the Stevenson Food Pantry and Art with a Heart. In junior year, she continued volunteering with the Stevenson Food Pantry and with Break a Difference and the 6th Branch in Baltimore. In Grace’s senior year, she volunteered for the final time with the Stevenson Food Pantry. Grace was also active in the School of Education and Stevenson University communities as a student athlete and member of the Teachers of Tomorrow club, the Psi Omicron chapter of Kappa Delta Pi, and the Chi Alpha Sigma National College Athlete Honor Society.

It is with great pride that the School of Education congratulates these exceptional individuals who exemplify the values of Stevenson University.