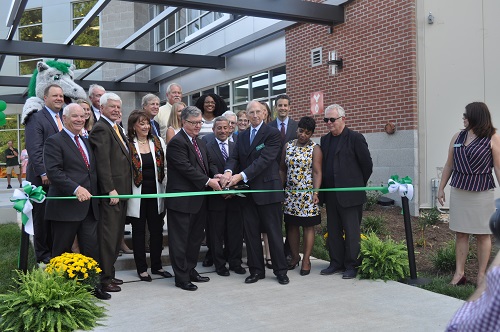 Stevenson University officially opened its new Academic Center at the Owings Mills North Campus on August 30, 2016. The new Center is named in honor of President Kevin J. Manning, Ph.D., who will be retiring in June 2017 after 17 years of leading the institution. At the ribbon cutting event, President Manning announced that Stevenson University has received a major naming gift for the School of the Sciences from the Beverly K. and Jerome M. Fine Foundation. The School is now called the Beverly K. Fine School of the Sciences. The gift was made possible by trustees of the Fine Foundation, Louis and Phyllis Friedman. Shown above is Chemistry Department Chair, Dr. Ellen Roskes, with Mrs. Phyllis Fridman.