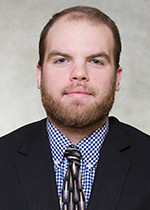 Small led the team and the conference with seven home runs and posted a .351 batting average, good for third on the Mustangs’ squad. In the season finale on May 1 at Marymount University (Va.), he hit three doubles with five RBIs in the Mustangs’ 22-3 victory over the Saints. (Photo from gomustangsports.com)