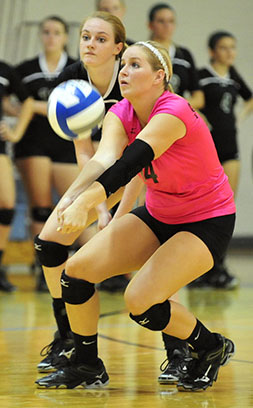 Stevenson women’s volleyball senior Samantha Perillo was named the Commonwealth Conference Player of the Week for the week on September 15, 2014, according to gomustangsports.com. Perillo serves as the team’s libero, and is wearing her signature pink jersey in the photograph.

This is Perillo’s first career conference Player of the Week honor. She is a two-time All-American and two-time first team all-conference honoree. She is also Stevenson’s career digs leader, surpassing the 2,000 career-dig mark with 2,028 as of 9/15/14.

Perillo serves as the team’s captain, and is a student assistant in sports information. A member of Who’s Who Among students in American Universities and Colleges, she is also a member of Lambda Pi Eta, the honor society of the National Communication Association. Congratulations, Samantha! (Photo courtesy of gomustangsports.com)