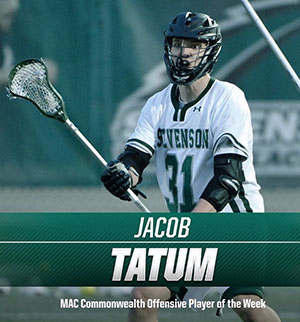 Junior Jacob Tatum was named the Middle Atlantic Commonwealth Conference Offensive Player of the Week for his performance in the Mustangs’ lacrosse win against York College on Saturday, Feb. 22. According to gomustangsports.com, “Tatum finished with five points on four goals and one assist as the Mustangs upset 6th-ranked York on the road. The junior scored a pair of goals in each of the second and third quarters, including a man-up goal in each quarter. He added one ground ball and one caused turnover and totaled seven shots. Tatum has a point in 32 consecutive games.”