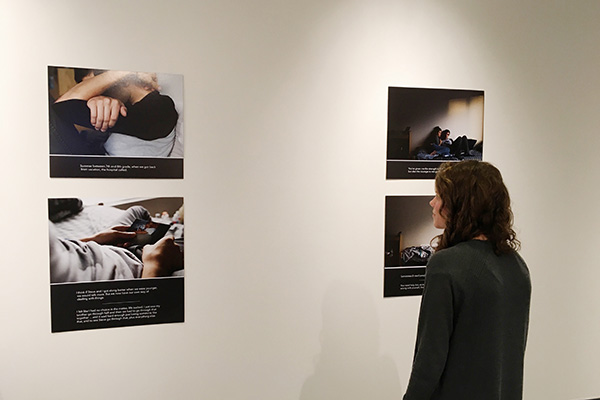 Several students from Stevenson University’s School of Design have their work on display at “Impossible Dreams,” an art exhibition hosted at Hood College in Frederick, Md. The exhibition, which includes artwork, film production, and photography by students and faculty from Hood College, Goucher College, Frederick Community College, and Stevenson, is on display through January 28 at Hood’s Hodson Gallery. The gallery is located in the Tatem Arts Center, 401 Rosemont Ave., Frederick, MD 21701.

In total, 11 works on display in the exhibition were completed by Stevenson Visual Communication Design and Film and Moving Image majors.

Included in the exhibition are four photos by junior VCD major Anna Lowe taken during a photojournalism course as part of a documentary assignment on mental illness. Her series of images, which focus on one individual suffering from depression, aims to promote the message that although the illness is not a choice, it is something that those afflicted must battle with every day. Lowe hopes that her photos help open up the conversation regarding mental health.

“This is the first time I have had my work on display in a gallery setting and it feels incredible,” Lowe said. “I have found a real passion for starting a social conversation through the use of my photography and I love the idea of having my work on display to continue that dialogue.”