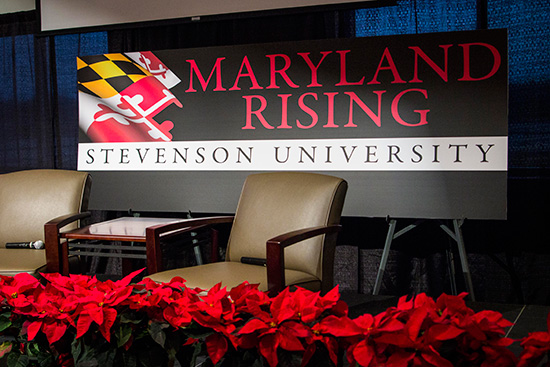 Stevenson University will host the work of Baltimore-based painter Gina Falcone Skelton from March 8 through April 20 in the Art Gallery on the University’s Greenspring Campus, 1525 Greenspring Valley Road, Stevenson, MD 21153.

A public reception will take place Wednesday, March 29, from 6-8p.m. The event is free and the community is encouraged to attend.

Skelton’s previous works incorporated oil on canvas, but in this exhibition, titled Spirit Bridge Torn, the artist highlights nine torn paper paintings ranging in size from intimate to monumental. Initially approached as collage, the work transitioned into an extension of her long-standing painting practice. As literal content weeded out of her imagery, so were the visible signs of assemblage.

“I stopped thinking of the work as collage because, in fact, I had stumbled back into painting,” said Skelton. “The only difference was trading brushes and oil paint for paper torn with my hands.”

The works began with a 7X7-inch format. As dozens, and then hundreds, of the small pieces were completed, Skelton began combining them to “tell larger stories.” The largest of the nine works in the exhibition contain 80 7X7’s while the smallest is made of just two.

Skelton has been active in the studio for over 35 years, working primarily in oil on canvas. She employs both figurative and landscape imagery in a nonliteral approach to painting. She has participated in solo and group shows all over the country including Baltimore, Chicago and New Orleans.

For more information about Stevenson’s arts and cultural events, contact Matt Laumann, Director of Cultural Programs and Exhibitions at mlaumann@stevenson.edu or 443-394-9699.