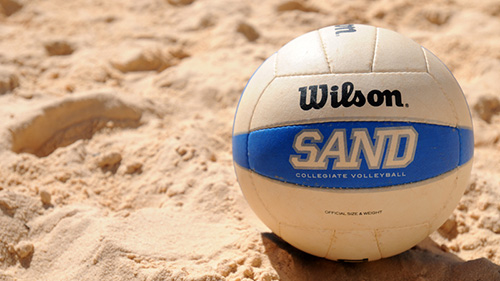 Stevenson University announced today that it will add Women’s Sand Volleyball as its 26th NCAA DIII sport. In doing so, Stevenson becomes the first DIII athletic program in the country to offer Sand Volleyball to its student-athletes, with an inaugural season scheduled to begin in Spring 2016.

“When we studied potential new men’s and women’s sports for Stevenson University, one of the things that intrigued us about Sand Volleyball was the number of new, highly-skilled, unique athletes that only play Sand Volleyball,” said Brett Adams, Director of Athletics. “With the NCAA Division III passing legislation that affirms Women’s Sand Volleyball as an emerging women’s sport coupled with the fact that it is already a very popular Olympic sport, we think that this is a great opportunity for our student-athletes.”

“At Stevenson, we have a tradition of taking strong elements of our University and making them even stronger,” said Kevin J. Manning, Ph.D., Stevenson President. “The addition of Sand Volleyball is no exception. Along with our well-established Men’s and Women’s Indoor Volleyball teams, we anticipate Sand Volleyball will only add to Stevenson’s reputation as a national leader in NCAA DIII volleyball.”

The inclusion of Sand Volleyball to Stevenson’s growing athletic program also carries with it a geographical significance.

“The significance of the first team in DIII also being the first team in the East cannot be overstated,” said Kathy DeBoer, Executive Director of the American Volleyball Coaches Association. “Stevenson’s decision to add Sand Volleyball ends the debate about whether this sport will succeed in all divisions and all parts of the country.”

Stevenson Athletics is working to secure sand volleyball courts that will serve as a practice facility as well as a home venue for the squad. The program does, however, have its coach in line to lead the inaugural team. Current Women’s Volleyball Coach Dave Trumbo, in his eighth year at Stevenson, will head up the Sand Volleyball squad, bringing along several of his indoor players to help comprise the 2016 roster.

“The girls on the Stevenson Indoor Volleyball team are both intrigued and excited about the addition of Sand Volleyball,” Trumbo said. “Many are very anxious to play in the spring of 2016 as they know that it will improve their overall skills and conditioning. We will also be able to recruit student-athletes from warmer climates who want the chance to play sand volleyball or possibly be a dual-sport athlete and play indoor as well.”