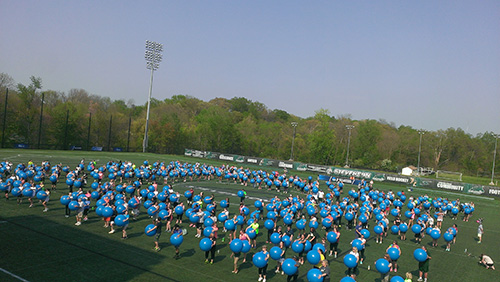 With approximately 390 participants, Stevenson University set the Guinness World Record for the largest exercise ball class Wednesday, May 6, at Mustang Stadium. The class—led by M.C. McFadden, Athletics Administrative Coordinator—spanned a little more than 30 minutes and took up nearly the entire football field.

Proceeds from the event, which totaled nearly $2,400 will be split between the Wounded Warrior Project and Wishes for Warriors.

“This achievement is a perfect example of the sense of community at Stevenson—students, faculty, staff, and friends of the University came together for a common goal,” said Morgan Somerville, Director of Student Engagement and one of the event’s organizers. “Together we not only etched our spot in history, but we also had a lot of fun and supported veterans. It was a beautiful day to have fun, workout, and share our Mustang pride.”