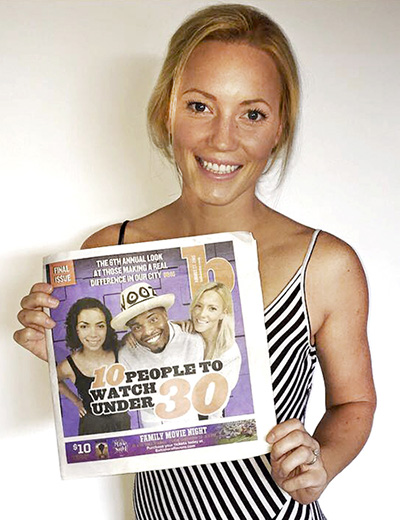 Stevenson University alumnus Lisa Hinton (Chemistry ’11) has been named to the Baltimore Sun’s 6th Annual “10 People to Watch Under 30″ list. The list, which highlights the area’s top young talents in a variety of fields, was published last week in b, the newspaper’s weekly free magazine.

Hinton, 26, is the winemaker at Old Westminster Winery, a company owned and operated by her family—which includes her parents and two siblings. The company’s Albariño 2013 was named the Best White wine at the 2014 Maryland Governor’s Cup Competition. And, the growing business, which bottled and sold its first wines in 2013, is set to open its brand new tasting room on its grounds in mid-October.

A Westminster native who arrived at Stevenson in 2007, Hinton remained an undecided student before opting to major in chemistry during her sophomore year. It wasn’t until her senior capstone project at a local winery that she discovered her passion for winemaking.

“It’s very neat to think how the internship hours she completed through Stevenson’s program marked the start of a now flourishing winemaking career,” said Ellen Roskes Ph.D., Associate Dean and Chair of Chemistry. “Lisa was an excellent and hardworking student, and it’s very exciting to be able to follow her progress and success.”

“Dr. Roskes was awesome in terms of my senior capstone, being so flexible and allowing me to experiment and do research and help me along the way,” Hinton said. “I would definitely give thanks to her and Stevenson’s School of the Sciences for their incredible support. No one had ever done a senior project on winemaking before, so it was awesome she agreed to let me explore that topic.”

Hinton explained that one doesn’t need be a chemistry major to make a good-tasting wine, however, the background knowledge that comes from understanding the sciences behind winemaking serves as a huge advantage during production. Elements such as knowing the optimal time to pick, recognizing the acidity and sugar levels in the grapes, and understanding the various chemical, microbial, and physical reactions during the process all play a part.

Said Hinton, “You always have your senses, taste and smell, but [by knowing the chemistry] now you have support through analytics. You have proven facts and actual numbers that show you what’s going on.”

Read more on Hinton and the Old Westminster Winery here on the Baltimore Sun website.