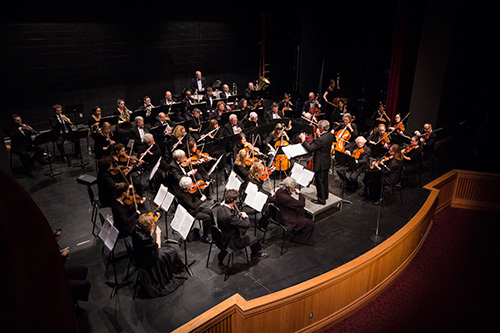 Stevenson University will host two diverse musical events in May, both of which will be held on the University’s Greenspring Campus, 1525 Greenspring Valley Road, Stevenson, MD 21153.

On Friday, May 8, at 7:30 p.m., Stevenson will present “Primavera,” the annual spring musicale featuring the University’s student music groups, including the Chorus, directed by Robert Suggs, D.M.A, Music Director and Conductor, and the Ukulele Ensemble, directed by Jared Denhard, Adjunct Director of Music. Primavera will also feature the debut of Stevenson’s newly established String Quartet, consisting of four freshman students. The program—free and open to the public—will be held in the St. Paul Companies Pavilion.

Sunday, May 10 at 4 p.m., the Greenspring Valley Orchestra, directed by Suggs, will perform “Isn’t it Romantic?” a program of music that sounds like it comes from the Romantic period—although most of it is not. Featured music comes from the movie E.T., and the piece that inspired its sound track, Howard Hanson’s Symphony No. 2. “Romantic.” The concert, held in Stevenson’s Inscape Theatre, is $10 for general admission and $5 for students and seniors. Reserve tickets by calling the Stevenson University Box Office at 443-334-2433.