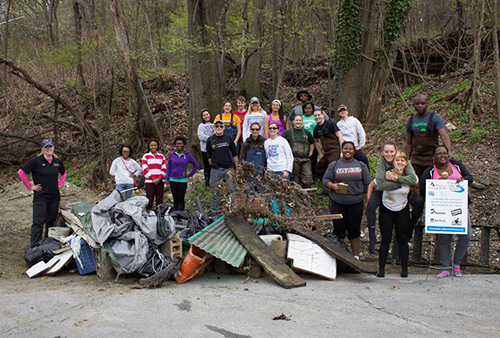 Stevenson University students, faculty, and staff spent Sunday afternoon, April 19, removing more than one ton (2,125 pounds) of trash from a portion of the Jones Falls in North Baltimore. Last year, the team cleaned up more than 1,000 pounds of trash from the Falls, which empties directly into the east side of Baltimore’s Inner Harbor.

“Most of the plastic we find is in the form of plastic bags, which get torn apart, stuck to trees and bushes, float in the water, and you even see them used as parts of birds’ nests,” said senior Biology major Ava Schein, President of Stevenson’s Environmental Club. “A lot of the trash we find takes hundreds or thousands of years to completely decompose, so unless we clean it out of the watersheds and the Bay, it will be there for a while. By getting rid of this harmful trash, we hope that the wildlife won’t suffer and the water will be cleaner and safer.”

Some of the more common items found by the more than two dozen volunteers included aluminum cans, plastic drinking bottles, plastic grocery bags, and packaging from food. The group also encountered several oddball pieces of garbage such as a kitchen sink, a door frame, a large rusted ladder, and a full wire bed frame.

Schein, who organized the cleanup in coordination with Stevenson’s Center for Environmental Sustainability, said that although the group’s effort helps make a difference, a more concerted effort needs to be made from the community at large.

“In just two hours, 25 people were able to collect 2,000 pounds of garbage. If everyone in the Chesapeake Bay watershed area did a stream cleanup even twice a year, we could be so much closer to a cleaner Harbor and Bay,” Schein said. “The Chesapeake Bay is the largest estuary in the United States and is not in good condition. The Bay and all of its inhabitants really deserve the help.”