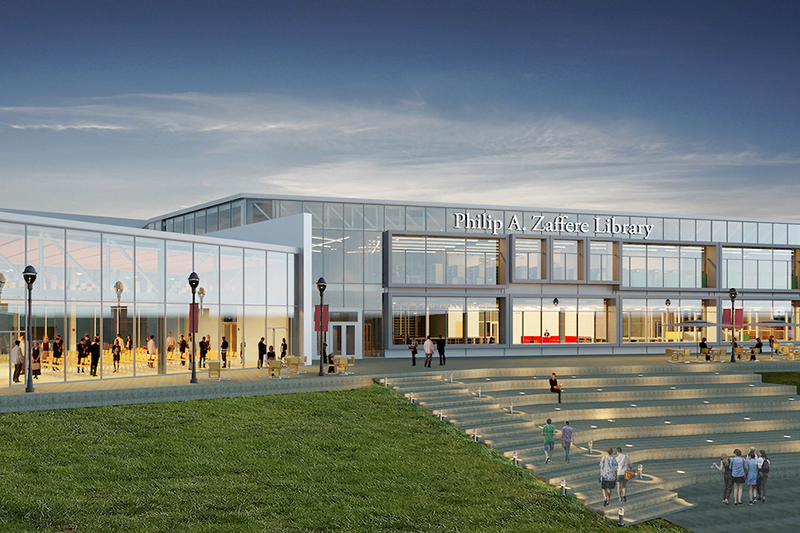 Stevenson University has received a $2 million gift—one of the largest in the university’s history—from the Philip A. Zaffere Foundation for its new Owings Mills campus library. The new 55,000-square-foot library will be named in honor of the late Philip A. Zaffere, an entrepreneur, inventor, and food production engineer from Maryland’s Eastern Shore. The facility will complement the Manning Academic Center and School of Design at Stevenson’s Owings Mill North campus location.

“We are very grateful for this extraordinary gift and the difference it will make in the lives of our students,” said Elliot Hirshman, President of Stevenson University. “Philip Zaffere’s life demonstrates so many of the characteristics that Stevenson works to develop in our students—determination, vision, and innovation. We are honored that our new library will bear his name.”

Philip A. Zaffere was born in Federalsburg, Md., in 1930, and took over operations of his family’s bakery business during his college years. An outside-of-the-box thinker, Zaffere engineered food production methods and technologies that eventually took his family’s small company to a national level. He developed successful formulas for the mass production of baking crumbs and transformed his family’s company into Shoreman Food Technologies. Under Zaffere’s leadership, Shoreman—which was ultimately sold to the PET Food Corporation in 1988—became the main supplier for nationwide brands such as Stove Top Stuffing and Mrs. Paul’s frozen foods. While the needs of his family’s business interrupted his own college studies, Zaffere maintained a deep and lifelong curiosity for the sciences and engineering as well as a commitment to supporting education and his community. He passed away in January 2016.

Stevenson will break ground and begin site development on the new Philip A. Zaffere Library this spring. In addition to library facilities, the complex will include a black box theater; a faculty commons with offices; and a variety of gathering spaces for academic, social, and cultural functions. The building will enhance Stevenson’s student experience on the Owings Mills campus by expanding research, study, and social spaces as well as foster collaborations between academic departments.

“Phil was someone who not only could see into the future, but had the courage to act on it,” said Phyllis Friedman, a long-time friend of Philip Zaffere. “I know that he would be so proud to have his name on this library of the future that will offer to so many the opportunity to create a better world.”