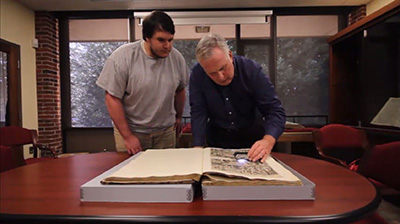 Stevenson University Public History students have joined with Maryland Public Television to search for nearly 200 photographs of Marylanders killed or missing during the Vietnam War. Of the 1,015 Marylanders whose names are on the Wall of Remembrance in Washington, D.C., photos for 187 are still missing from the Vietnam Veterans Memorial Fund’s online Wall of Faces.

MPT identified the need for these photos as the network prepares for events—set to take place in 2016—commemorating the service of Marylanders during the Vietnam War. The network then reached out to Stevenson’s Public History program for assistance.

To locate photographs of the 187 Maryland service members, the group of seven Stevenson students will make use of online databases, high school libraries, county historical societies, and contacts within the villages, towns, and cities from which our service members left to serve in Vietnam.

“What makes the discipline of Public History unique from other forms of history is its commitment to the public and the community,” said Glenn Johnston, Public History Chair. “Any project that seeks to better educate the public about its past is a great project on which our students can work. Our students learn about history they never lived, places they have never seen, and communities with which they are unfamiliar—all in service to those who cannot speak on behalf of themselves. “