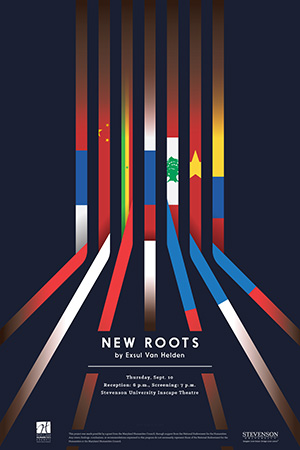 Stevenson University will host a screening of “New Roots,” a documentary film produced by faculty member Exsul Van Helden, Adjunct Professor of Film and Moving Image, Thursday, Sept. 10, at 7 p.m. in the University’s Inscape Theatre. The theatre is located on the University’s Greenspring campus, 1525 Greenspring Valley Road, Stevenson, MD 21153. The film screening, which is preceded by a reception at 6 p.m., is free and the community is encouraged to attend.

The 60-minute film explores the challenges faced by women who have immigrated to the United States and find themselves living between cultures. Women from diverse ethnic and socioeconomic groups share their experi­ences and feelings about assimilation, values, child-rearing, and being foreign-born in contemporary American society.

“From the hardships of leaving family behind to the struggle of learning a new language, this film demonstrates the journey of the female immigrant in the United States,” Van Helden said. “The film also examines how the overall experience of immigrants compares to the adversity that refugees face in this country.”

Students and alumni from Stevenson’s School of Design also contributed to the production and distribution of the film.

Stevenson, known for its distinctive career focus, is the third-largest independent university in Maryland with more than 4,400 students pursuing bachelor’s, master’s, and adult bachelor’s programs at locations in Stevenson and Owings Mills.