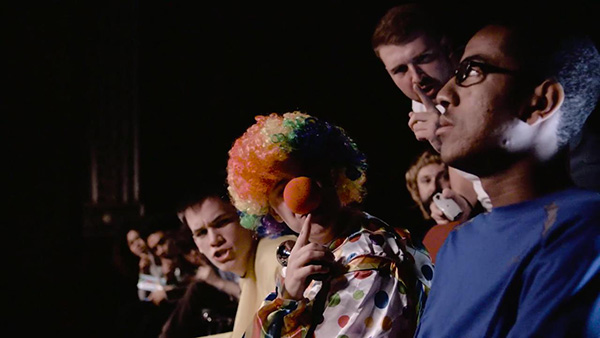 Students from Stevenson University’s Film and Moving Image program produced and starred in a 30-second short that will run prior to movie screenings at Baltimore’s historic Senator Theatre.

The public service announcement, titled “Don’t Talk Before the Movie,” features Stevenson students performing obnoxious movie-watching behavior such as shouting during the film or texting on a bright cell phone screen. And, just to accentuate the message, they also included some over-the-top antics such as drumming and getting a haircut.

“We really enjoy the clever PSA that Stevenson’s students put together,” said Kathleen Cusack, co-owner of the theatre. “Customers appreciate the personal touch from the community and recognize the thought that was put into creating something both entertaining and clear. We are excited to have it screen at The Senator and we’re sure our patrons will love it.”

SENATOR THEATRE: “Don’t Talk Before the Movie” Promo from Film & Moving Image at Stevenson on Vimeo.

“I think this was a fantastic opportunity for the students to create something with a guaranteed platform for public exhibition,” said Christopher Ernst, Assistant Professor of Film and Moving Image. “Knowing that a project will be seen by a wide audience raises the stakes and helps give students a sense of how the material covered in our courses translates to work that lives outside the classroom.”