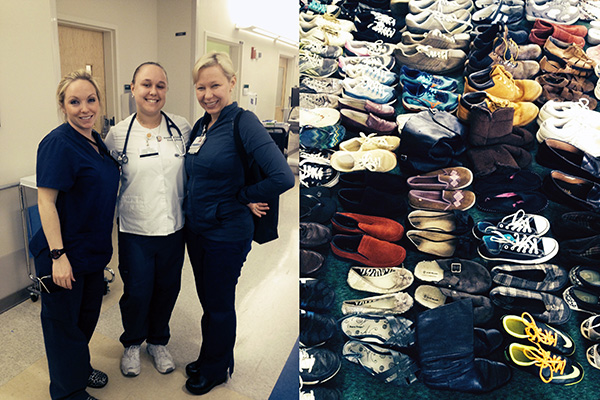 This past spring, Stevenson Nursing major Holley Cox ’15 collected 138 pairs of shoes to benefit Baltimore’s homeless population as a part of her senior community service project.

Cox arrived at the idea when talking to her supervisor at Johns Hopkins Hospital. The supervisor told Cox that the hospital was consistently running low on shoes to provide the homeless patients it treated. Many individuals, Cox would learn, endured through Baltimore’s harsh winter with the same worn and torn footwear.

Although she initially set her goal at 50 pairs of shoes, Cox easily surpassed that number thanks to her ability to spread the word about the cause and the tremendous amount of support she received in return. It took her just two months to amass her grand total of 138 pairs (276 individual shoes).

“This was a simple project, but it was extremely helpful. It was practical,” Cox said. “A very large homeless population comes through the Hopkins Emergency Room. It really hit home that what I was doing was not only good for me but fantastic for the people who benefitted from receiving these shoes.”