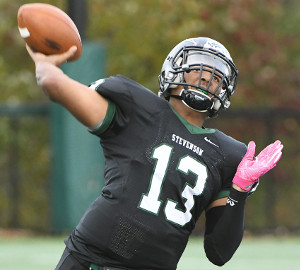 Stevenson University senior quarterback and Business Communication major Dan Williams has already been named D3Football.com All-East Region, the MAC Offensive Player of the Year and was recognized as a First Team All-MAC selection both as a sophomore and junior.

Williams will now be among some of the nation’s best quarterbacks as he will serve as a college counselor at the Manning Passing Academy in Thibodaux, Louisiana, from June 21-24.

In its 23rd year, the Academy is an annual football camp organized by the Manning family (Archie, Peyton, Eli, and Cooper) to host more than 1,200 quarterbacks, running backs, receivers and tight ends to receive some of the best coaching in the country. Williams will be among other notable college quarterbacks from programs including the University of Alabama, University of Georgia, University of Missouri, Purdue University, University of Washington, University of South Carolina and University of Tennessee, to name a few; as they will act as counselors for the youth and high school players in attendance. An invitation to serve as a counselor is generally reserved for the best quarterbacks in the nation – mostly representatives from the NCAA Division I level.

Aside from coaching at the camp, college counselors also have the opportunity to participate in personalized training sessions both on and off the field with the Mannings themselves as well as some of the best quarterback coaches in the country.

“I’m honored to have the opportunity to represent Stevenson University at this year’s Manning Passing Academy. I would like to thank the Manning family for the chance to compete with other college players, and learn from many coaches,” said Williams. “I am truly humbled to be selected and I am very excited and eager to coach the athletes there as well learn some things during the camp. Lastly, thank you to my family, Coach [Ed] Hottle and Coach [Ryan] Larsen for believing in me.”

Williams enters his senior year as the Stevenson all-time leader in every passing category. During his career, he has passed for 6,026 yards and 55 touchdowns, and completed 60 percent of his passes.