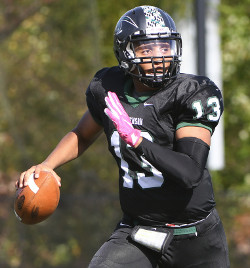 Stevenson University Business Communication senior and quarterback Dan Williams has been named as one of 169 candidates for the 2018 Allstate/American Football Coaches Association (AFCA) Good Works Team.

According to gomustangsports.com, “the Allstate AFCA Good Works Team has been one of the most esteemed honors in college football for more than 25 years. The student-athletes who are nominated for this award not only demonstrate a unique dedication to community service and desire to make a positive impact on the lives around them, but they also show tremendous perseverance as well as the ability to overcome personal struggles and come out victorious against all odds.”

To be considered by Allstate and the AFCA for a nomination, each player must be actively involved with a charitable organization or service group while maintaining a strong academic standing.

Williams has served as a two-year team captain for the Mustangs and is a weekly volunteer at Baltimore’s Mount Washington Pediatric Hospital. He has also participated in the Mustangs’ annual spring reading program at Mechanicsville Elementary School in Sykesville, Md.. served as a volunteer with Carroll County Special Olympics, and worked as a football instructor for Special Olympics during the 2017 NCAA Convention in Nashville, Tenn.

On campus, Williams is a team representative to the Stevenson Student-Athlete Advisory Committee (SAAC) and is also the vice president of Stevenson’s chapter of Fellowship of Christian Athletes (FCA).

On the field, Williams is a two-time Middle Atlantic Conference First Team selection and the 2016 MAC Offensive Player of the Year and a 2016 D3football.com All-Region selection. He is the program record holder in every passing category and enters his senior season with 55 touchdowns and 6,026 passing yards. (Thanks to gomustangsports.com for this information and photograph)