Recent Stevenson Alumnus Returns to Career Fair – As An Employer 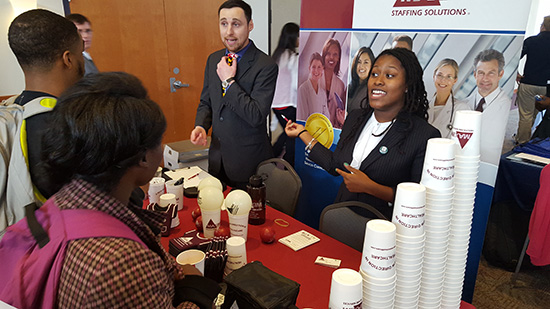 “Ajani set herself apart as soon as she introduced herself,” Manko said. “She was confident, full of energy, open, and outgoing. Maxim is a team-oriented environment, and I could immediately see her affecting our team in a positive way.”

Fast forward a few months later to the University’s Fall 2015 Business and Technology Career Fair. Both Khalfani and Manko had returned to that same booth in Rockland Banquet Hall, only this time the two were on the same side of the table.

In June, Maxim Healthcare hired Khalfani as a field support specialist, and as a part of her role, she travels with Manko to career fairs and other recruiting events on behalf of the company.

Her advice to students to maximize their career fair experience?

“You have to take charge. Don’t wait for employers to see you walking around looking lost,” Khalfani said. “Make sure you approach the table and come with a great attitude and great spirit. Have a great open personality, it gets taken into consideration. And don’t forget to dress the part.”