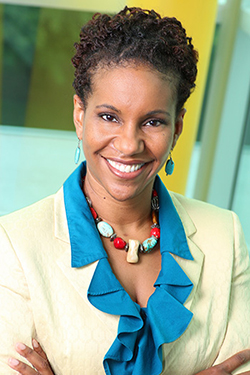 Stevenson University’s School of the Sciences will host the sixth annual Slattery Lecture, Wednesday, September 16 at 5 p.m. The lecture will be held in the St. Paul Companies Pavilion on the Greenspring Campus, 1525 Greenspring Valley Road, Stevenson, MD 21153.

Prior to the Michigan Science Center, Matthews served as the Vice President of Museums for the Cincinnati Museum Center. During her tenure, she was instrumental in positioning the museum as a thought leader in STEM and created the museum’s signature programs in early childhood science training and girl-focused STEM engagement.

Her presentation, “Gamechanger: Putting the Why Back Into the What of Math and Science,” will explore the challenges of recruiting talent capable of working in STEM fields as well as the critical impact of those fields.

The event will also recognize Stevenson student Megan B. Toms, a Medical Laboratory Science major, who will be honored as the 2015 Slattery Scholar.

The Slattery Lecture honors the legacy of Susan Palmer Slattery, former Chair of Stevenson’s Mathematics Department, who passed away in 2010. Slattery was a vital force in the University’s School of the Sciences and worked tirelessly to engage students and colleagues in the pursuit of science, academic excellence, and collegiality across disciplines.