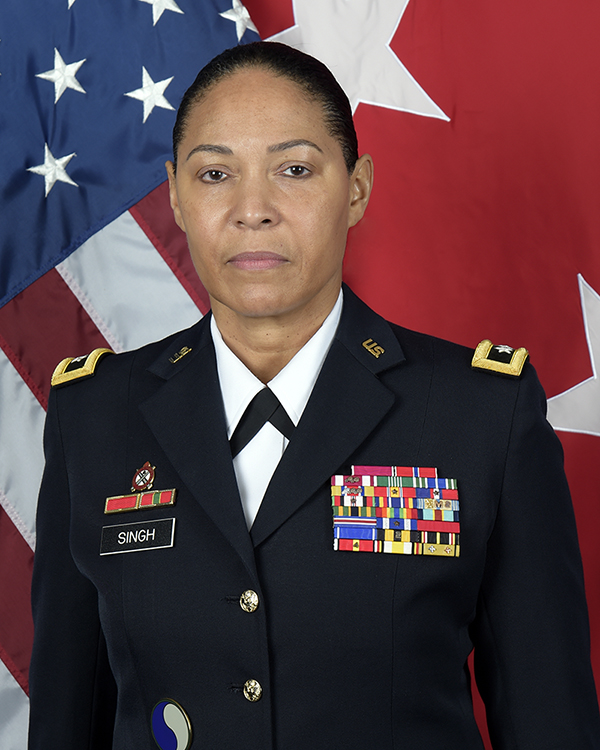 “We are delighted that Maj. Gen. Singh will be speaking to our graduating seniors this May,” said President Elliot Hirshman, Ph.D. “Having a leader of her caliber sharing her experiences and perspectives with our new alumni is sure to inspire them toward achievements in their own careers.”

Singh serves as a senior advisor to the Governor of Maryland and is responsible for the readiness, administration, and training of more than 6,700 members of the Maryland Military Department. As the Adjutant General, she is the official channel of communication between the Governor and the National Guard Bureau and is a member of the governor’s cabinet.

Singh, who grew up in Frederick County, Md., is a longtime resident of Prince George’s County, where she currently resides with her husband and two daughters. She received her commission in 1991 through Officer Candidate School at the Maryland Military Academy in Reisterstown, Md. Her military career spans more than 30 years in both the enlisted and officer ranks. Singh has served in staff and command assignments at every level, including assignments in Kosovo and a combat tour in Afghanistan supporting Operation Enduring Freedom.

She retired as Managing Director in Accenture’s Health and Public Service North America operating unit in May 2016. Her responsibilities included managing all operational activities to include the financials, strategic business plans, quality programs, program delivery, human resource management, business approvals, internal controls, and sales activities for a budget that exceeded $3 billion. Her military decorations include the Legion of Merit and the Bronze Star Medal, among other honors. Singh is a graduate of the U.S. Army Command and General Staff College and the U.S. Army War College, where she received a master’s degree in Strategic Studies.