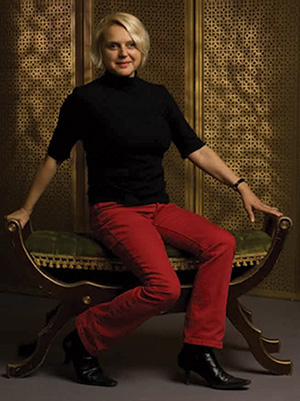 The event, titled “Behind the Scenes You Love: An Evening with Hollywood Production Designer Kalina Ivanov,” is free and the public is invited to attend. A reception will be held at 6 p.m., with Ivanov’s talk beginning at 7 p.m.

The presentation will consist of clips from the different films she has worked on as well as her own commentary and analysis.

Ivanov, born in Sofia, Bulgaria, has received both Emmy and Art Director’s Guild Awards. She is currently working on the new version of Poltergeist. Ivanov’s design philosophy is to immerse herself in the script, fully embody the characters, and reveal their history through color, texture and architecture.

For more information about Stevenson’s arts and cultural events, visit facebook.com/SUArtEffects; follow us on Twitter @SUArtEffects; or contact Matthew Laumann, Manager of Cultural Programs. Email mlaumann@stevenson.edu or call 443-352-4491 to request a copy of Art Effects, the biannual guide to arts and culture at Stevenson.