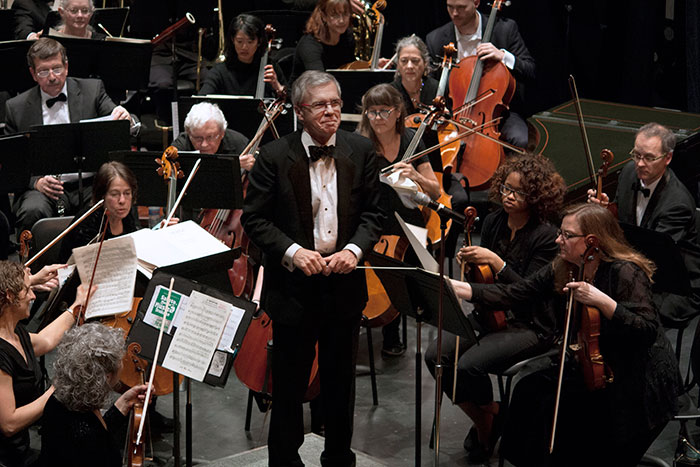 On Sunday, April 27 at 4 p.m., the Greenspring Valley Orchestra will perform Shakespeare in Music at the Inscape Theatre on Stevenson’s Greenspring Campus, 1525 Greenspring Valley Road, Stevenson MD 21153. Tickets are $10 for general admission and $5 for seniors and for students with ID. To reserve tickets, call the Stevenson Box Office at 443-334-2433.

Led by conductor Robert Suggs, D.M.A, Professor of Music at Stevenson, the Greenspring Valley Orchestra will present a program of music inspired by the works of Shakespeare. The pieces will range from orchestral settings for Elizabethan madrigals with Shakespeare lyrics to music from Bernstein’s West Side Story, which is an updated version of Romeo and Juliet.

“This is a very special concert in that every piece on the program is inspired by Shakespeare, whose 450th birthday is being celebrated this year,” said Suggs. In addition to conducting the performance, Suggs will be singing an aria from Verdi’s opera Otello.

“All-in-all it should demonstrate the timeless quality of Shakespeare’s words and the music which has been inspired by them,” he said.

A portion of the music is a reworking of songs from Shakespeare’s time period that were used in a couple of his plays. Others are from either film adaptions, concert pieces, or are taken from operas. All of the pieces will be introduced with readings from the plays that inspired them. Stevenson Theatre and Media Performance faculty members Chris Roberts and William LeDent will deliver the theatrical readings.

The Greenspring Valley Orchestra consists of Stevenson University students, faculty, alumni, and other members of the community.

For more information about Stevenson’s arts and cultural events, visit facebook.com/SUArtEffects; or contact Matthew Laumann, Manager of Cultural Programs. Email mlaumann@stevenson.edu or call 443-352-4491 to request a copy of Art Effects, the biannual guide to arts and culture at Stevenson.