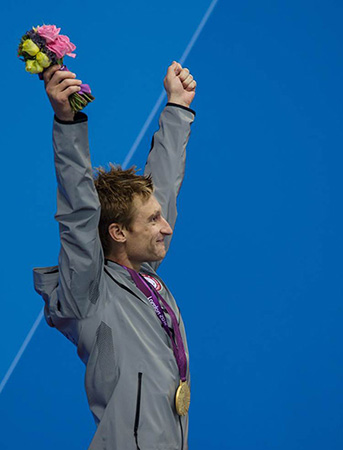 Stevenson University will welcome 955 new students, including 730 incoming freshmen and 225 new full-time transfer students, at the University’s Convocation ceremonies, Thursday, August 21 at 3:30 p.m. in the Owings Mills campus gymnasium. The ceremony’s keynote address will be delivered by Brad Snyder, a former officer in the U.S. Navy who sustained complete vision loss when he stepped on an improvised explosive device (IED) in Afghanistan.

A former captain of the U.S Naval Academy swim team, Snyder returned to the pool as part of his rehabilitation process, and, after just a few months of training, was able to earn a spot on the U.S. Paralympic National Team. At the 2012 Paralympics he competed in seven events, earning two gold medals and one silver medal. His victory in the 400-meter freestyle occurred on September 7, 2012, exactly one year from the day he suffered his vision loss. Among fully blind swimmers, Snyder is the current world record holder for the 400-meter freestyle and 100-meter freestyle events.

Stevenson University, known for its distinctive career focus, is the third-largest independent undergraduate university in Maryland with more than 4,400 students pursuing bachelor’s, master’s, and adult bachelor’s programs at locations in Stevenson and Owings Mills. To learn more, visit stevenson.edu.