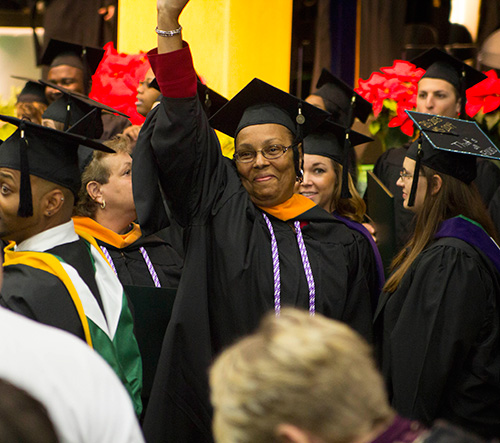 The weather outside was beautiful and the atmosphere inside was spirited—from both graduates and their family and friends—as more than 240 students received their diplomas during Stevenson’s Winter Commencement ceremonies, Monday, December 15.

Claire Moore, Vice President for Student Affairs, has attended more than 50 commencements while at Stevenson. This particular ceremony, she said, rivaled any in terms of the amount of passion and energy in the audience. When the final graduate walked across the stage, the audience erupted with an unprompted standing ovation.

“It was exuberant. The crowd was beyond proud of their graduates,” Moore said. “They were so happy, and the feeling was contagious.”

Robinson, delivering the keynote address, urged graduates to remember that for the rest of their lives their degree is something that no one can ever take away from them. He also described how along with that degree comes a lifetime bond to the University and a connection to Stevenson’s traditions.

Commencement also included the distribution of various awards highlighting student achievements. They were as follows: