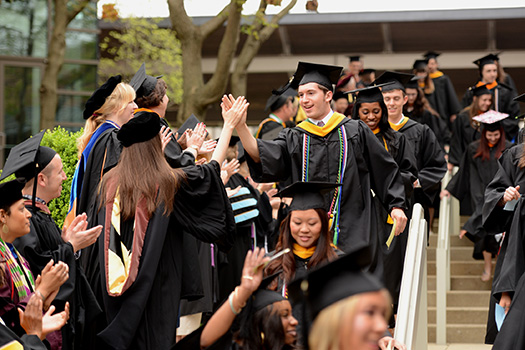 A total of 538 students will walk across the stage and receive their diplomas when Stevenson University celebrates its 62nd Commencement, Thursday, May 21, at the University’s Greenspring gymnasium.

Baltimore Ravens Head Coach John Harbaugh will provide the keynote address to graduates and their families. Harbaugh—who will be delivering his first commencement speech—has led the Ravens to a playoff berth in six of his seven seasons in Baltimore and, in 2012, captured the franchise’s second Super Bowl victory.

Harbaugh is the only head coach in NFL history to win at least one playoff game in six of the first seven seasons of a coaching career. Additionally, he owns the second-most playoff victories (10) by a head coach in the first seven seasons of a career since the 1970 AFL-NFL merger. Under Harbaugh’s guidance, Baltimore has produced the NFL’s second-most total victories (82, including playoffs) since his 2008 arrival.

The University will also recognize Rev. John W. Swope, SJ, the Founding President of Baltimore’s Cristo Rey Jesuit High School, with Stevenson’s fifth annual Social Entrepreneurship Award. Cristo Rey, which opened in 2007 in East Baltimore, offers a college preparatory education to the children of under-served families throughout the city. Nearly all of Cristo Rey’s students become first-generation college students and 100 percent of them have been accepted into college. Two members of Stevenson’s Spring 2015 graduating class are also graduates of Cristo Rey.

Both Harbaugh and Fr. Swope will receive an honorary degree of Doctor of Humane Letters, Stevenson University’s highest academic honor.

Can’t make it to the ceremony? We’ve got you covered.
Watch Live Stream